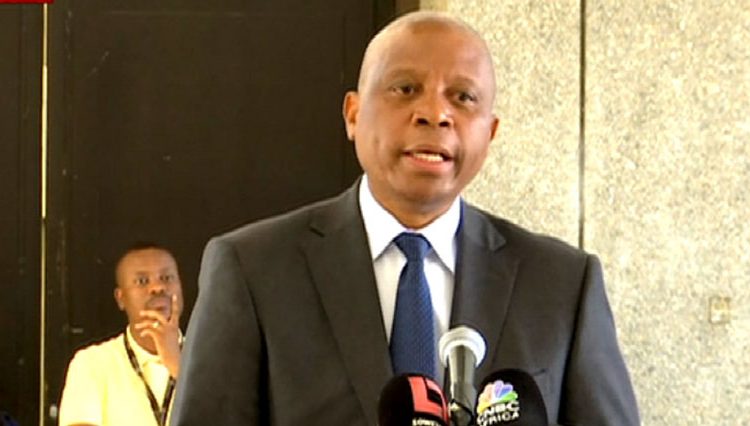 Herman Mashaba has quit after three years as mayor of Johannesburg, signalling his belief that the Democratic Alliance intends to break up the coalition that helped him land the job.

“The DA I signed up for is no longer the DA that emerged from the recent federal council meeting,” he told a news conference on Monday.

His resignation is from the city, and from the DA.

Mashaba’s decision was sparked by Sunday’s election of Helen Zille as the DA’s federal council chairperson, a position second only to that of party leader Mmusi Maimane.

He accused the party of veering off leader Mmusi Maimane’s vision of “one South Africa for all”.

Mashaba said “as a patriot, I will always choose my country” ahead of the party.

Taking up the responsibility of mayor was never about a love for positions, he said, but rather was motivated by “the desire to get our city to work again, which is why I have always said if Joburg works, SA works”.

The city’s banner, which was mounted at 9.55am behind the podium from which he was set to speak, was removed at 10.04am, two minutes before Mashaba started his speech.

“It is not in my nature to wait for people to push me out. I have lived my life on my own terms, which is why I have called this press conference to announce my resignation from the DA effective from November 27, 2019,” said Mashaba.

“It is on the request of the DA leadership that I will hold off my resignation until this date to allow them the opportunity to find a new person for this position.

“By so doing I will no longer serve as DA councillor and therefore I am required to resign as mayor effective from the same date. I have given this decision considerable thought.”

Maimane, who attended the press conference, said he “respects the decision”, although it was his wish for Mashaba to finish the term.

Mashaba slammed the DA, saying it had predetermined to collapse the coalition partnership it has with the EFF in Joburg.

He said the DA had long had a problem with his approach and leadership style as well as implementing EFF policies such as the insourcing of 7,000 workers. The DA, he added, had set out to frustrate him “for being pro-poor”.

“I cannot reconcile myself with people who fail to realise that SA is more unequal now than was before 1994,” said an emotional Mashaba.

“The DA has criticised and questioned my approach. They expected me to govern arrogantly, as if I had overwhelming majority. I have had to deal with people who don’t want me to insource, which benefited 7,000 families, because it is not DA policy. Why don’t they make it DA policy?”

The press conference was closed by Maimane with the words “you are a hero to me” directed at Mashaba.

Mashaba was previously quoted as saying he would resign if “right-wing elements” took over the DA. Business Day reports he was unhappy with the recommendation of the review panel – which was made up of former party leader Tony Leon, former policy head Ryan Coetzee and Capitec founder Michiel le Roux – that the DA should rethink its relationship with the EFF, with which he is on solid ground and whose support resulted in him being elected.

The DA shed about 400,000 votes to the ANC and Freedom Front Plus in the May 2019 national election. It continued to lose support in subsequent by-elections.

An internal party leadership election is scheduled to take place in 2020, ahead of local government elections the following year.

The Sunday Times reported at the weekend that Maimane told the federal council he was “sick and tired” of people who were working to divide the DA.

He dared them to leave and form their own “pure liberal party” if they disagreed with his vision.

According to the newspaper, at the heart of the battle is what shape the philosophical outlook of the DA should take, with those supporting Zille in favour of a liberal approach based not on race but on individual rights and competence. Maimane, on the other hand, wants DA policies to prioritise race-based socioeconomic redress, which has been seen by his detractors as a dilution of DA liberalism.

Speaking after her election, Zille admitted her relationship with Maimane had recently taken strain. They were, however, ready to work together, just as they had when Maimane took over leadership from Zille in 2015, she said.

“Mmusi and I have always had good relations,” she told a press conference.

“It has always been cordial. We’ve been through some strained times but we’ve really always been decent and professional.”

Zille also vowed not to overstep the boundaries of her new job.

“This a job that co-ordinates the different structures, functions, systems and processes. My job is to ensure all those things run smoothly.

“I will not be the leader. I will play a background role. I will stay in my lane. I will participate where it is appropriate for me to do so. I respect and support the leader and [the entire] leadership.

“People are worried I won’t stay in my lane. The problem is many people have only seen me in a leadership position, but I have very often played behind-the-scenes roles.”