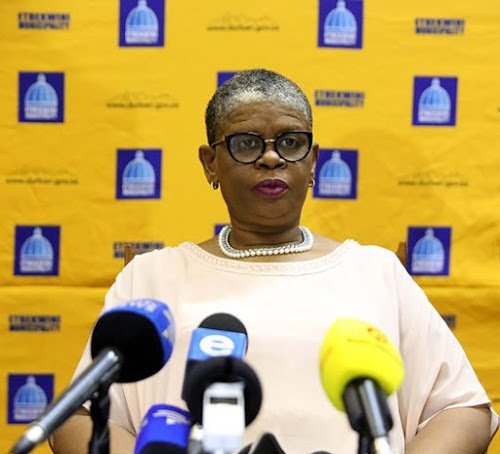 Durban – Axed eThekwini Municipal mayor, Zandile Gumede, has said she will not be silenced. In a post on her Facebook page on Wednesday, Gumede said she wanted to clear her name.

She further urged the media to be patient while she sought personal, political and legal counsel regarding the decision undertaken by the ANC PEC in KZN to fire her.

Gumede said she had been inundated with media queries for comment regarding the decision which was taken on Tuesday.

“I note the statement and reserve my right to remain silent counsel regarding this decision. I will be making a public statement and announcing my next course of action. In the main, I want to clear my name particularly on how I have been characterised and vilified directly or indirectly,” she said.

Gumede said she believes that it is important that she sets the record straight as the first woman mayor in Durban and first woman chairperson of the biggest region of ANC in South Africa.

“I urge the members of the media and the public to wait for my public announcement, in due course. I won’t be silenced and I will not allow the truth to be made a first casualty of this matter,” she said.

Gumede ended her post with a quote from Amilcar Cabral; “Tell no lies. Expose lies whenever they are told. Mask no difficulties, mistakes, failures. Claim no easy victories.”

Gumede was fired by her party after a protracted three-month battle that created divisions within the party in KZN. The party also fired the speaker of the council William Mapena and the chief whip Neli Nyanisa.

Look: 25 killed in KZN crashes over the long weekend