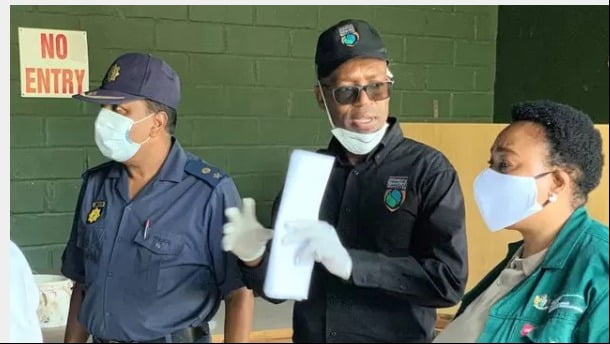 Durban – A TINY coffin, educational charts for children and desks stand to be the focus of a police investigation after they were found in an abandoned chemical factory at Izotsha outside in Port Shepstone.

Mayor Nomusa Mqwebu said the disturbing findings were made during a raid at the factory by Economic Development, Tourism and Environmental Affairs, the police, and environmental officers.

“The inspection was a response to concerns about the state of the factory, and the fact that it was abandoned. What was discovered, in a secluded part of the factory, sent chills down my spine. The educational charts for children, desks and a coffin – in the same room – were a scary sight.

“I’m tempted to believe there was a crèche there or at least some presence of young children. It’s easy to want to believe that death had also occurred in that place because of that coffin,” Mqwebu said yesterday.

She said several children had been reported missing in the municipal district until early this year.

“I’m not saying those cases are linked to this, but one can’t avoid thinking about those missing children after discovering this scene. We have requested that MEC Nomusa Dube-Ncube appeal to the premier for a thorough investigation into this matter. The area now is a crime scene, the police have cordoned it off and we have provided our own security personnel to ensure that no one tampers with the place until all the evidence has been registered,” she said.

An employee with intimate information about the matter said the police had broken through a vault door and discovered the secluded area with the coffin and children’s educational material.

The factory, according to the department, is owned by a businessman who has since abandoned it and moved to Umhlali, about 18 months to two years ago.

Dube-Ncube said a multi-disciplinary team would work on the case.

“Files with different documents with the information of the factory, a mini-lab with different bottles of chemicals being stocked on the shelves, and a mixer and two tanks of about 10000 litres containing some liquids remained inside the facilities,” the department said in a statement.

The businessman was given 48 hours to clear the area of chemicals, but department spokesperson Nathi Olifant said he had been informed that the man had not complied with the notice.

“The deadline for the clean-up was Monday but he responded in writing and raised issues which I was not made privy to. He has asked for an extension but we have since escalated the matter to the national Environmental Affairs Department,” said Olifant.

Dube-Ncube was not happy with the delay in resolving the matter.

“It’s unfortunate that we see further delays in the matter, even though there’s evidence that crime has been committed. There has to be an investigation into evidence that there might have been children in that place. And if proven, why were they kept in such a place?” she asked.

Port Shepstone Station Commander Sethenya Nxamangele said the scene and dockets were with the team of investigators.

Police spokesperson Captain Nqobile Gwala said the place was cordoned off and an inquiry opened for investigation. Daily News