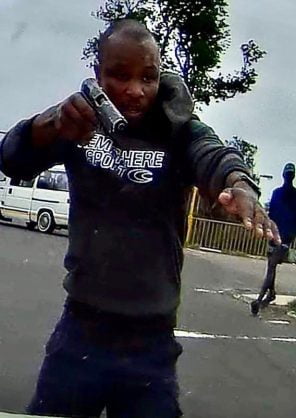 Durban – KwaZulu-Natal police have acted swiftly to apprehend suspects in the viral video of an attempted hijacking in Durban captured on the dashcam of the victim.

They appeared yesterday in the Durban Magistrates Court and were remanded until 13 January 2020.

It is alleged that on 15 December 2019 at 13:00, a 45-year-old male was with his family in their vehicle on the corner of South Coast Road and Himalaya Drive when two armed males pointed them with firearms and shouted them to jump out of the vehicle.

The complainant managed to reverse and drove off then suspects fled.

A case of attempted carjacking was opened in the Montclair police station for investigation.

The video of the incident went viral on social media.

They were both arrested in Lamontville and charged for attempted carjacking whereas a 20-year-old suspect was also charged for possession of an unlicensed firearm.

A 33-year-old suspect was also linked to a Montclair carjacking case where a motorist was hijacked of his vehicle on 22 November 2019 in the Montclair policing area.

The KwaZulu-Natal Provincial Commissioner, Lieutenant General Khombinkosi Jula commended the police officers on the arrests and urged the community to ensure that they report criminal activities to the police as soon as the crime is committed so that the police can immediately commence with the investigation and bring the perpetrators to book.