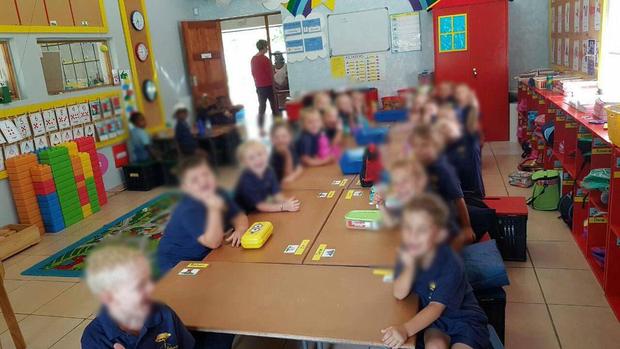 Schweizer- Reneke – A teacher who allegedly separated black and white children in the Grade R class at Laerskool Schweizer-Reneke in North West has been suspended with immediate effect, education member of the executive council in the province Sello Lehari said on Thursday.

He said the suspension was to allow investigations to continue.

The teacher reportedly sent the controversial picture to parents via Whatsapp intending to show parents how children were settling in on their first day at school on Wednesday.

Lehari said the school’s explanation was that black children were separated because they were new at the school and could not speak Afrikaans or English.

“We did not accept the explaination,” he told community members.

On Thursday, protesters, many donning political party T-shirts, had gathered outside the school gates to protests against what they termed was racial segregation at the school.

“The incident happened at a class next to my child’s class. She was not affected but this segregation cannot continue. Our children cannot experience what our parents went through during apartheid,” said one parent.

She was at the school to collect her child following the tense situation at the school. While protesters sang and danced outside the school, some parents broke a part of the fence on the other side of the school to gain and take their children away.