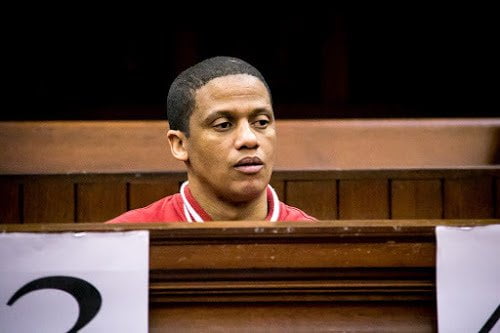 CCTV footage shows the killer of three-year-old Courtney Pieters carrying her body along busy Cape Town streets before dumping it.

The footage, handed in by the prosecution during Saunders’ trial at the high court in Cape Town, shows Mortimer Saunders carrying Courtney’s body through Epping in a plastic bag.

Meanwhile, the Western Cape High Court has sentenced Mortimer Saunders to two life sentences for the rape and murder of Pieters.

Judge Babalwa Pearl Mantame said on Tuesday: “In the circumstances, a long period of imprisonment will afford him time to reflect on his actions.”

The public gallery was filled with people wearing T-shirts with Courtney’s picture and the words: “Forever in our hearts”.

As soon as the sentence was handed down, the public gallery cheered and applauded.

He was whisked away quickly.

Saunders was found guilty on November 7 of Courtney’s rape and murder. He gave her ant poison to make her sick, then choked her, and used a towel to cover her mouth, the court found.

He admitted to murdering her, attributing it to “ill feelings” towards her mother.

He denied rape, saying he touched her private parts only after she died.

She disappeared from the home he lodged at with her mother Juanita, and after a prolonged search her body was found dumped in Epping Industria in Cape Town.