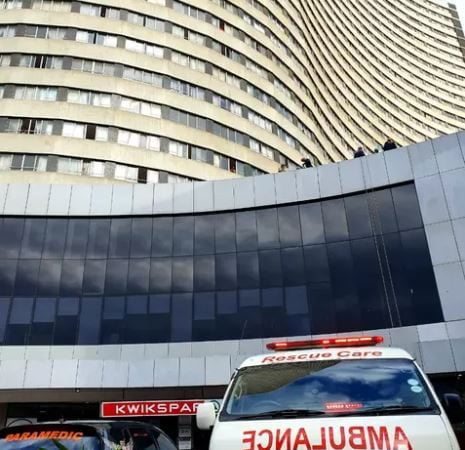 Durban – The man who fell out of the 7th floor of an apartment building in the Durban CBD on Friday morning had been running from police.

According to KZN police spokesperson Brigadier Jay Naicker, a multidisciplinary operation led by police officers from the Provincial Drug and Firearm Unit was conducted at a building on Margaret Mncadi Avenue in the Durban CBD at around 5am when the incident occurred.

“Police officers penetrated the building and an occupant attempted to flee from police by jumping from the 7th floor. He sustained severe injuries and was taken to hospital for medical attention,” said Naicker.

Rescue Care paramedics rescue a critically injured man, who had fallen off a high-rise building in Durban. pic.twitter.com/VqOnvaE9el

He said during the raid police seized 1.5 kilograms of cocaine powder; rock cocaine and methcathonone with a combined street value of more than R700 000.00.

“The 41-year-old suspect remains in hospital under police guard and will appear in the Durban Magistrates Court as soon as he is released from hospital,” said Naicker.

Garrith Jamieson from Rescue Care Paramedics said when paramedics arrived on scene, they found the patient lying on a ledge.

Jamieson said the man was stabilised on scene by advanced life support paramedics for the critical injuries he sustained.

The patient then had to be carefully removed on a stretcher by SAPS search and rescue and brought to the ground before being transported to hospital for the further care he required.

Meanwhile the Provincial Commissioner, Lieutenant General Khombinkosi Jula, hailed the arrests and complimented the swift response by police officers based at Ixopo. “This type of fraud is very prevalent and we are focusing our attention on getting to the source of these fraudulent activity. I also want to convey my appreciation to those citizens who observed this suspicious behavior and immediately alerted police,” he said.