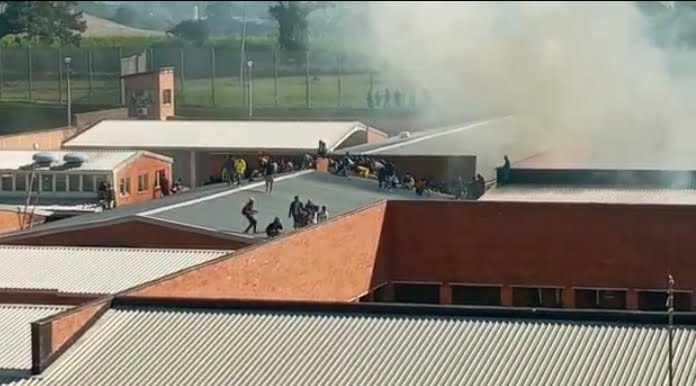 One inmate fell to his death from the roof top of Umzinto Prison while attempting to escape from prison on Monday. The brazen attempt came after a fire broke out at the correctional services facility.

The Department of Correctional Services confirmed that the inmate died when he was trying to escape at the Umzinto Correctional Centre in KwaZulu-Natal on Monday afternoon.

“Following the fire at Umzinto Correctional Centre, one inmate, from a group that had climbed to the roof in an attempt to escape, succumbed to his injuries after falling to the ground, and died,” spokesperson Singabakho Nxumalo said.

The affected area of the prison was labelled as Section A, which houses remand detainees.

Nxumalo said a group of awaiting trial inmates, climbed the room in an effort to escape.

Earlier, the Department of Correctional Services confirmed that a fire was started in one of the cells of the prison.

Images of a number of what’s believed to be prisoners on top of the facility have been doing the rounds on social media.

Department spokesperson Singabakho Nxumalo says one inmate, from a group that had climbed to the roof in an attempt to escape, succumbed to his injuries after falling to the ground and died.

“DCS officials and SAPS officials remain on-site in order to quell any potential flare-ups and the situation is under control.

“We condemn in strongest possible terms any attempts by inmates to undermine security at the centre we will not hesitate to take strong action against those behind such acts.”