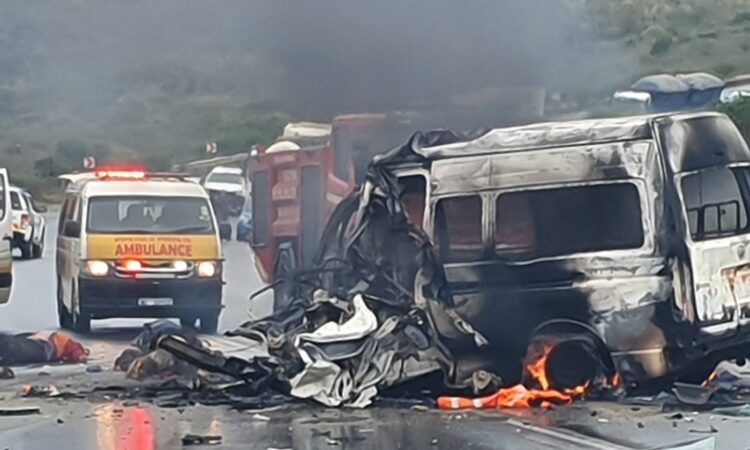 Durban – Thirteen people have been killed while four others are in a critical state in a horrific crash between a truck and a taxi on the R66 Mthonjaneni pass in northern KwaZulu-Natal.

Kwazulu Private Ambulance Service at 08h30 responded to reports of the collision.

When emergency services arrived they found that a truck and taxi had collided.

The truck left the roadway and crashed down an embankment, while the taxi caught fire.

Paramedics quickly assessed the scene and found 4 critically injured patients, and tragically a further 13 occupants had sustained fatal injuries and succumbed to their injuries before emergency services arrived.

Paramedics stabilized the critically injured patients and transported them to the hospital for further treatment.

Currently, the R66 is closed while the scene is being investigated and cleared by authorities.

[BREAKING] According to reports just in, approx 13 People have tragically lost their lives in yet another fatal road accident in the province.

This particular accident took place on the R66 between Ulundi & Melmoth, apparently between a minibus taxi & a truck. pic.twitter.com/AlisZD1v0P