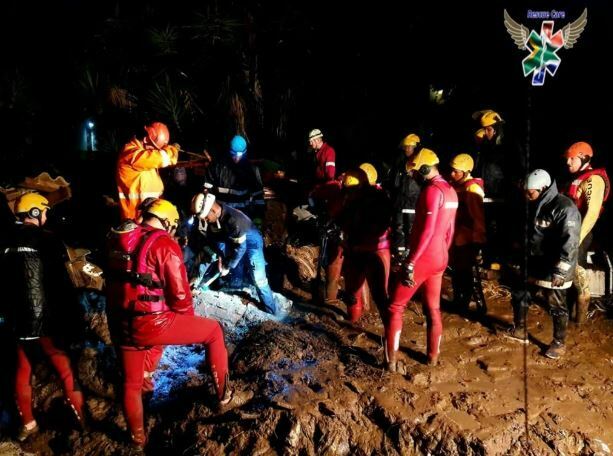 In a series of WhatsApp messages containing pictures and video footage, sent by from Rescue Care spokesperson Garrith Jamieson, rescue workers can be seen working tirelessly in rainy conditions to rescue people trapped in rubble as several houses collapsed in Ellen Road in the Malvern area in Queensburg near Durban.

At around 01:00 on Tuesday morning, Jamieson said that two people had been confirmed dead and that more patients had been transported to hospital.

In the video footage, rescue workers can be seen sifting through mud and rubble trying to find survivors.

Just after 02:00, Jamieson said that the body of a baby had been recovered. “It’s quite upsetting,” Jamieson said.

“This brings the death toll to four from this mudslide.”

Jamieson earlier said the bodies of a boy aged around nine and a woman in her 30s had also been recovered.

He said “multiple houses” had collapsed owing to rain and mudslides.

At 02:20, Jamieson said in a message that search-and-rescue efforts had – for the time being – been suspended due to dangerous conditions.

Jamieson confirmed that two adults and two children had been killed and several others injured.

In a separate incident in West Road in Overport, KwaZulu-Natal, a fifth person – a man believed to be in his 20s – died in a house collapse as combined rescue teams attempted to free another victim from the rubble.

Lennox Mabaso, KZN Department of Cooperative Governance and Traditional Affairs spokesperson, said he was on his way to the disaster scenes.

“We will be issuing a statement as soon as we have a clear understanding of the extent of the damage. Our call centres have been flooded with calls. It’s impossible to say for certain how many people have been affected,” Mabaso said.

Drunk driver nabbed after near crash with officers, with dop still in cup holder