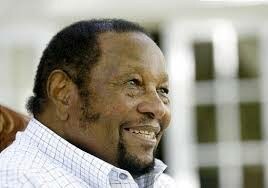 South African business pioneer Dr Richard Maponya died in the early hours of Monday after a short illness, he was 94.

In a short statement, the family said funeral arrangements will be announced in due course.”The family request some privacy during this time of grieving.”

A trained teacher, he started his business career in the clothing industry, but was blocked from opening a clothing store by the apartheid government.

He then established a milk delivery service in Soweto and by the 1970s owned a number of shops, petrol stations and car dealerships.

He became the first owner of a black-owned BMW dealership in Soweto in the 1980s, and also became the first black person to get horse-racing colours, reported the Mail&Guardian. “These were the black, green and gold of the then both banned African National Congress and Pan-Africanist Congress, making some white jockeys uncomfortable racing for him.”

In 2007, Maponya opened the Maponya Mall in Soweto on land he bought in the 1970s. He successfully resisted various attempts by the apartheid government to take the land away from him.

“I urge young South Africans to research the life story of this great legend, and draw lessons from how he overcame adversity to become one of the greatest pioneers and success stories of our time,” Ramaphosa said.