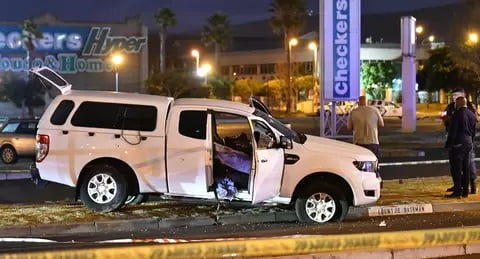 Cape Town – The murder of Extreme Security Measures owner Tim Lotter could be linked to the underworld war to gain control over security at nightclubs as well as the prostitution and drug trade.

Lotter was killed in an apparent hit on Sunday evening on the corner of Basson and Frans Conradie drives.

Witnesses said they heard what sounded like a machine gun being fired. He was shot multiple times and the bakkie he was driving was riddled with bullets.

The perpetrator wearing a balaclava allegedly climbed out of a grey BMW and fired at the bakkie fatally wounding Lotter and sped away from the scene.

It was alleged that Lotter’s security company had ties with the underworld and that the Sexy Boys gang was behind this attack.

A source close to the probe said: “Prior to his death Lotter was allegedly linked to the nightclub security controlled by the Sexy Boys and other underworld figures.

“It is alleged he jumped ship and joined forces with rivals in the underworld and when the Sexy Boys got wind of it, decided to take him out. His move to rival underworld figures would have resulted in huge financial losses to the Sexy Boys.”

Lotter’s name was also mentioned during the trial of controversial businessmen Nafiz Modack, Colin Booysen, Ashley Field and Jacques Cronje who face charges of money laundering and extortion linked to the hostile takeover of security at city restaurants and nightclubs.

The charges are linked to an incident in December 2017 when they allegedly tried to extort R90000 from the Grand Africa Café at the V&A Waterfront.

State witness Radley Dijkers said last year in the Cape Town Regional Court that he was informed that security services at the café would be taken over by TSG, a security company linked to Modack and Booysen.

According to his testimony, Dijkers met Booysen and Grand Café manager Bruce Maxwell in 2018 to discuss the takeover of security.

However, after the meeting Extreme Measures took over the security.

Police spokesperson FC van Wyk said: “A murder case was registered for investigation and detectives are following up on all leads.”