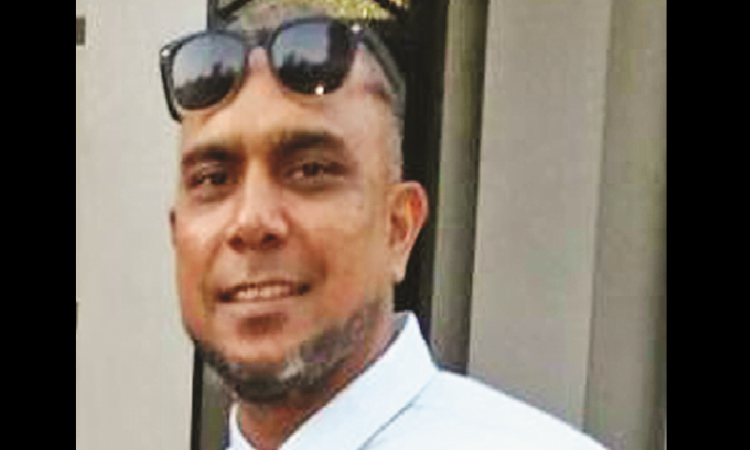 A Shallcross man, who relocated to Durban to take care of his mother, was hit by a stray bullet during a drug operation conducted by police at Taurus Street in Shallcross, on Saturday.

According to the family of father of four, Rivaj Sidhoo, 37, he took a walk to purchase cool-drink from a tuck-shop near his home when he sustained a gunshot wound to his abdomen area.

He was one of two people shot during a drug operation, which later escalated to a stand-off between residents and police outside the home of suspected drug kingpin, Yaganathan Pillay, commonly known as Teddy Mafia.

However, Sidhoo’s brother, Rosh, said in an exclusive interview with the Rising Sun that their family was later notified that his brother was being placed under police guard as he would be charged for the theft of firearm, public disturbance and causing violence, and aggravated assault to do grievous bodily harm.

It is alleged that police officers received information about drug activity and responded to the area, which is notorious for drug trade.

Sidhoo’s family allege that he notified them that one of the police officers who held a bag in his hand was making his way out of the area and fired gunshots into the air to get away from the area with the bag.

The family claims that one of the bullets struck him, while another bullet hit another man in his leg.

“A 29-year-old man was shot in the front of his leg with the bullet exiting through the back of his leg, while another man, aged 37, sustained a gunshot wound to the abdomen area. There was no exit wound indicating that the bullet was lodged. Both patients were stabilised before being transported to a nearby hospital for the further medical care which they required,” they said.

Sidhoo’s 63-year-old mother, Resh Naicker, said doctors notified her that his spleen had to be removed and that the bullet caused damage to his diaphragm. He suffered severe internal bleeding.

“We are shocked about the incident and my son’s condition is of great concern. I was told by doctors that the bullet is lodged in his stomach and cannot be removed. He will have to be on medication for the rest of his life and I don’t think he will ever fully recover from this,” she said.

Sidhoo’s brother, Rosh, said his brother was a responsible man who took care of his mother and the incident has negatively impacted on the entire family.

“My brother is being falsely accused. He was already in hospital before the police officers and residents clashed outside the house of the alleged drug lord. The police officers discharged their firearms with live ammunition and my brother was shot a while before the situation got tense and out of hand with the public. The rule of law applies to everyone. No individual is above the law. We want justice for my younger brother. We will leave no stone unturned in seeking justice and are pursuing a case against the police,” he added.

A report released by provincial police on Monday indicated that three suspects were arrested after police who were conducting the operation regarding drug trade were attacked and obstructed from carrying out their their duties.

Provincial police spokeswoman, Col Thembeka Mbhele, the Durban Flying Squad was conducting an operation in Taurus Street in Shallcross when they were allegedly attacked by a group of about 200 community members.

“Police were following up on intelligence (information) about drug trade in that area. Police officers were assaulted and a rifle was stolen. Police vehicles were stoned and damaged. The Public Order Police, National Intervention Unit, K9 Unit and Airwing, as well as Chatsworth police, were at the scene and paramedics were also deprived to assist the injured police officers by unruly crowd,” she added.

Cases of public violence, assault with intent to cause grievous bodily harm, theft of firearm, malicious damage to property and obstructing police officers are under investigation.

Injured police officers were taken to hospital for medical attention.

“Police arrested two suspects, aged 37 and 41, and they will be charged. Swift police action led to the recovery of the firearm and the arrest of a 26-year-old suspect, who was allegedly found in possession of a police rifle. He was caught while trying to conceal it. He will be charged for illegal possession of firearm. The arrested suspects will appear in the Chatsworth Magistrate’s Court soon. We will not tolerate such criminal and barbaric acts by people who attack the police and obstruct them from conducting their duties. Anyone caught doing so will face the full might of law,” said Col Mbhele.