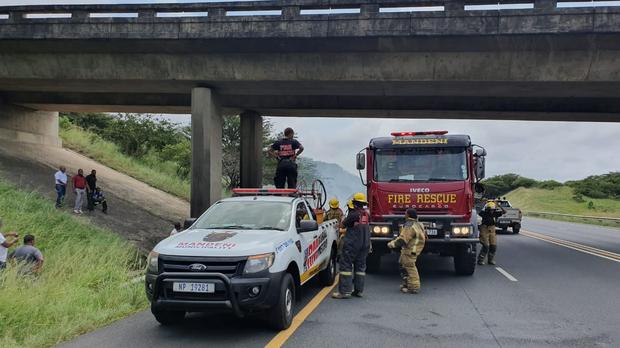 Durban – The driver of a motor vehicle died after allegedly losing control of the car and colliding into a bridge on the N2 near the Tugela, north of Durban on Friday.

Herbst said the driver had become trapped in the car when it caught alight.

Police have to still establish the identity of the driver and cause of the collision.

The burnt shell of a car on the N2 in Tugela, north of Durban. Video by IPSS Medical Rescue

“The Mandeni Fire and Emergency department had arrived on the scene to extinguish the fire. Unfortunately, the driver had died. The police are on the scene conducting their investigations,” Herbst said.

The cause is unknown.

Vehicles and trucks using the road are stuck in traffic in the busy intersections. Daily News