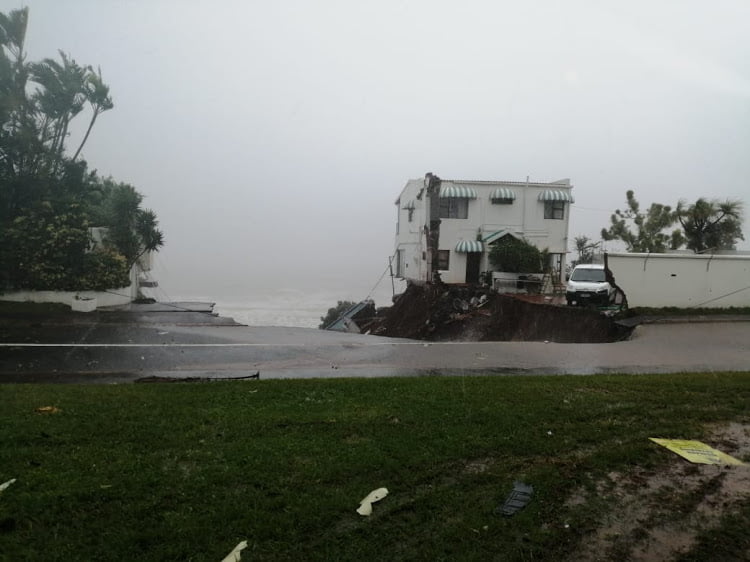 #DurbanFloods – Man pulled from Amanzimtoti home just before it collapsed

Durban – Paramedics managed to save a man, who was lying injured in a house in Rockview Road, Amazimtoti, just before it collapsed.

A paramedic has described how he and another rescue worker saved a man from an Amanzimtoti house that collapsed on Monday morning due to severe flooding following torrential rains.

Chris Botha, who has worked in emergency services for 43 years, said he received a message about a house collapsing on Amanzimtoti’s Rockview Road.

He said he rushed out to the scene at about 7am and saw a number of cars parked outside a home in Rockview Road.

“Someone said that a man had collapsed in the property next door. I waded through some water and had to break the door open to get into the house where I saw a man lying on the kitchen floor. He had fallen but he had previously had a stroke.

“His head was split open above his right eyebrow and he was complaining of pain down his neck. As we were trying to stabilise him, a few people ran inside telling us we needed to get out as the house was going to collapse.”

Botha said that despite the imminent danger, they had to stabilise the man.

“I looked outside and saw that everyone was frantic about the house. We managed to get a trauma board and we made our way outside and across the water.”

Botha said the man, who is in his early 60s, was transported to hospital for further care.

“We watched the property collapse. It was hectic. We hear that further rain is headed our way and that will mean trouble because already roads have washed away.”

ER24’s Russel Meiring confirmed paramedics assessed the man who was in the home at the time of the collapse and found that he had sustained injuries to his head.

“The man was treated for his injuries and thereafter transported to Prince Mshiyeni Hospital for further care. It is believed that the heavy rainfall played a contributing factor in the structural collapse.”