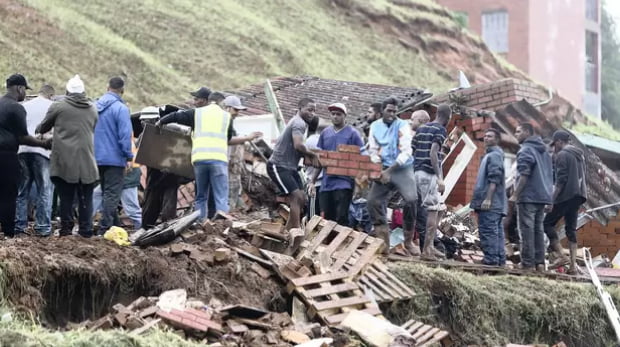 Durban – Grown men wept bitterly as the bodies of eight family members, including two toddlers, were pulled from the rubble of their collapsed Westcliff home on Monday night and Tuesday morning.

Monday night’s storm ravaged KwaZulu-Natal, with Chatsworth being among one of the hardest-hit areas.

The heavy rains resulted in mudslides and flooding which left a trail of death and destruction. More than 70 people are reported dead in the province.

The family, whose identities have not been disclosed until their next of kin have been informed, were living in a house situated behind Westcliff Secondary, on Crimby Road.

The head of the family worked as the school’s care-taker.

According to rescue services at the scene, two family members were found alive and one was found dead on Monday night.

The other seven bodies were recovered by members of the community and police on Tuesday afternoon.

Men as old as 75 were on their hands and knees digging through the mud, searching for possible survivors, POST reported.

Bayview resident Steven Mudaly, 75, said he heard from his daughter-in-law that the house had collapsed and immediately went out to assist.

“The search had to stop on Monday night because the area was unstable. It resumed late on Tuesday.

“I joined the rescue operation, carrying rubble away from the scene in the hope we would find the family alive.”

Reverend Jonathan Naidoo, of the AFM Church, said it was heartbreaking when they found the body of a woman in the debris.

“Grown men burst out crying. It was very sad. It was even more heartbreaking when the bodies of two children – aged one and two – were found,” said an emotional Naidoo.

The body of another woman was also found clutching her son.

He said he had last seen the family at the weekend during an Easter church roadshow.

“They came to our church and shared a meal with us. We even gave them hampers.

“We knew the family well. The children always played on the road and were often seen laughing and being mischievous. We are planning to hold their funeral at our church hall.”

A Crimby Avenue resident cried as she told how she looked after one of the children in her crèche.

Cookie Jugmohan, 45, said the 4-year-old boy was very close to her.

“He was our baby. I was always kept a close eye on him and fussed over him. When I heard this family was affected I couldn’t handle it. My husband and I left our own flooded home to see how we could support this family.”

She said she did not expect to see the bodies still under the debris.

Jugmohan said on Monday night, her family was also trapped in their own home.

“My husband and I had to send our dogs over the fence and we took our kids upstairs and waited. The downstairs, which is on road level, was completely flooded and the water was as high as our hips.”

Another resident, Melleni David, 43, said she was the first person on the scene on Tuesday morning.

“Last night my husband and I came out to help but we were told it was not safe so we decided to return in the morning.

“I was here at 7am. We are standing together as a community and trying to help those affected by the storm. It is heartwarming to see the Chatsworth community rally in time of need.”

The chairperson of the Chatsworth and Districts Civic Federation, Teddy Govender, said this was the second time in two years that Chatsworth had been hard hit by a storm.

He said the city needed a disaster management plan for the area.

“We need more localised disaster management in the area. We are a huge community and from previous floods, we know families are always left displaced.”

He added that “one life lost, was one too many”. POST

#DurbanFloods – Man pulled from Amanzimtoti home just before it collapsed