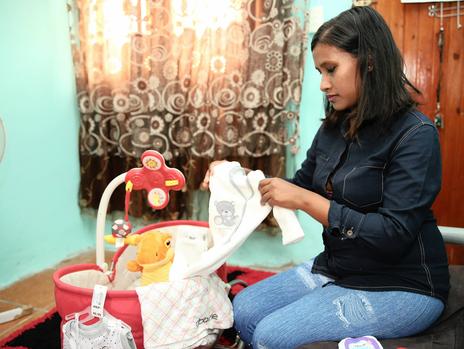 Durban – A PINETOWN mother is pursuing legal action against Clairwood Hospital after she claimed her healthy newborn baby died as a result of incompetence.

Nisha Naidoo, 34, of Savannah Park, said she was told her son, Caleb, who was born at 30 weeks, had aspirated – food, liquid, or some other material entered the airway or lungs.

Health authorities are investigating.But Naidoo said a post-mortem had not been conducted.

“As a mother who gave birth to a healthy baby, I didn’t feel as if they did their best to save my child. My baby was neglected. If the staff had been more hands-on, and the doctor had come earlier, he may still be alive.

“Why wasn’t there a doctor on stand-by for emergencies?” Naidoo said.

She had waited 10 years for a second child, said the grieving mother.

Naidoo gave birth at RK Khan Hospital in November and was subsequently transferred to the Kangaroo Mother Care unit at Clairwood Hospital.

This refers to a technique of newborn care where babies are kept skin-to-skin with a parent, typically their mother, and it is commonly used for low birth-weight, pre-term babies.

“He weighed 1.5kg and needed to gain 300g before he could be sent home. For almost two weeks, he drank expressed breast milk via a tube in his nose. It was removed on December 19.”

She said she fed Caleb at 11pm that evening (December 19) and burped him before going to sleep around midnight.

When she woke to feed him at 2.30am, his breathing was shallow. Naidoo called the night-shift nurse for help.

“She told me in an arrogant manner to take my child and leave him on the bed in the resuscitation room.”

Naidoo said the nurse’s colleague could not be found in the ward.

“The sister suctioned my baby and began resuscitating him. She had the saturation machine on him (which indirectly monitors the oxygen saturation of a patient’s blood), which showed 100%.”

The next moment, the nurse, said Naidoo, began screaming for her to search for her colleague who could not be found.

“The nurse became frustrated and left resuscitating my baby to phone the doctor.”

She said while standing outside, she noticed Caleb’s saturation level had dropped from 100% to 21%.

“I overheard her tell the doctor that my child’s saturation was 100% and that he was still pink and warm. I wanted to tell her the saturation had dropped, but feared she would shout me. I was helpless. When she returned and saw his saturation was low, she began resuscitating him.”

Naidoo said the nurse yelled at her that she could not do everything by herself and demanded that she call another nurse from the paediatric department to come and help her.

She said the nurse was covered with a hospital blanket and asleep on a chair.

After informing her what was happening, Naidoo went back to the mother care unit.

“The sister was on the phone again and my child was unattended.”

Naidoo claimed the nurse from the paediatric department arrived about an hour later, and Caleb’s saturation continued to drop. The doctor, she said, arrived at about 4am.

“The doctor tried resuscitating my baby and put him on a drip. After 6am I saw them put a sheet over his face and body and I began shaking uncontrollably.”

She said the doctor had said that they were sorry and that they had tried their best.

“She said my baby had aspirated. I was shocked because he didn’t vomit or choke. His breathing was only shallow.”

She said a nurse told her the next morning that a post-mortem was not needed because the doctor had already ascertained and informed her of the cause of death.

Naidoo’s husband, Raymond, said: “After so many years, I was excited to have another child, but now our lives are filled with sadness and so many unanswered questions.”

The Naidoos’ attorney, Ashwin Rughbeer, said: “It is trite law that some entity, person or body must be held accountable. Liability has to be established to bring peace of mind and restitution to the grief-stricken family.

“We will be proceeding by instituting legal action against the hospital for the negligence of the staff on duty.”

The spokesperson for the Department of Health, Ncumisa Mafunda, said the department had instituted an investigation.

She said the department appealed to aggrieved health care users and the public to demand to speak to the health facility management or public relations officers to immediately register a grievance.