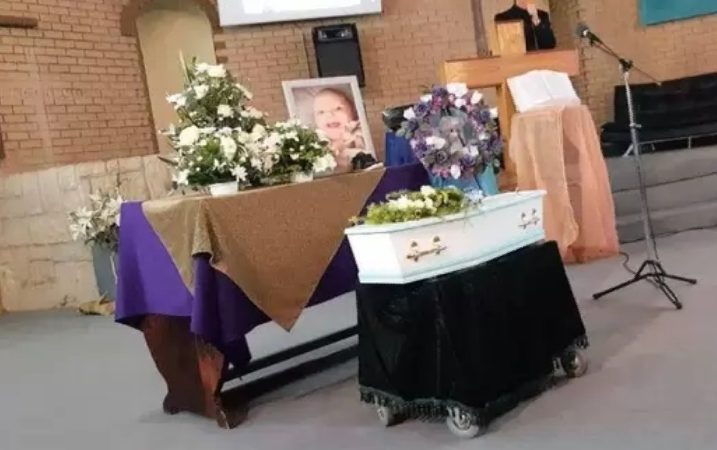 DURBAN – A Pietermaritzburg family, whose five-month-old baby died after he was refused treatment at two state hospitals, have yet to cremate the little boy as they are waiting for autopsy results.

Baby Brody Lee Bezuidenhout died at Edendale Hospital in the early hours of Sunday morning last week, after his family were allegedly earlier turned away by nurses at Grey’s and Northdale hospitals in the capital.

His family are now seeking legal advice as they want to take action against the Department of Health and the two state hospitals.

Baby Brody Lee’s aunt Janine Kemp said that doctors at a third state hospital declared him dead, after trying for 45 minutes to resuscitate him. They believe he died from bacterial meningitis – a strain, they were told, could have been treated by two shots of penicillin.

Kemp said they believe that had he been treated, the infant would be alive today.

Instead, the family held a memorial service for him on Thursday.

KZN Health Department spokesperson Ncumisa Mafunda said the department had appointed an independent investigator to look into the matter “so that the appropriate action can be taken, should anyone be found guilty of an offence”.

Kemp said Brody Lee woke up crying last Saturday night and his mother, Linda noticed that he had a high fever.

Kemp said when he continued to cry, they knew something was wrong and rushed to Grey’s Hospital. When the family arrived at the hospital at about 11.30pm, the infant’s vital signs were checked and he was given a suppository to break his temperature. But Grey’s would not admit him. The family were given a referral letter to Northdale Hospital’s children’s clinic.

“When the family got to Northdale Hospital, the nurses there didn’t even bother looking at the baby or the referral letter. The nurse was very arrogant with us and told us there were no beds available,” Kemp said.

“We told her we were not asking anyone to give up their bed. We just wanted the nurse to attend to the baby in his mother’s arms.”

She said the nurse refused to examine the baby and instructed the family to go to another hospital.

The family rushed back to Grey’s Hospital, only to be turned away as they were supposed to go to Northdale.

“While we were leaving Grey’s, the baby started turning blue around the lips and he went cold,” she said.

The family took Brody Lee home but after an hour, they noticed that the infant had blue spots all over his body.

The family then rushed to Edendale Hospital, the only other state hospital in the city, where he was declared dead.

Mafunda said the department was extremely concerned about the matter and the KZN Health Ombudsperson has made contact with the family to advise them how to lodge an official complaint.

“To lose a child, regardless of the circumstances, is a painful experience. To this end the department wishes to express its condolences to the family concerned,” she said.

Kemp said the family were still struggling with Brody Lee’s death and had since refused to return to their Napierville home. They have been living with family in Albert Falls.

“We had to go to the house and remove all Brody Lee’s clothes and stuff. They can’t even look at it because they are so distraught. At his memorial, his father could not even walk,” she said. THE MERCURY