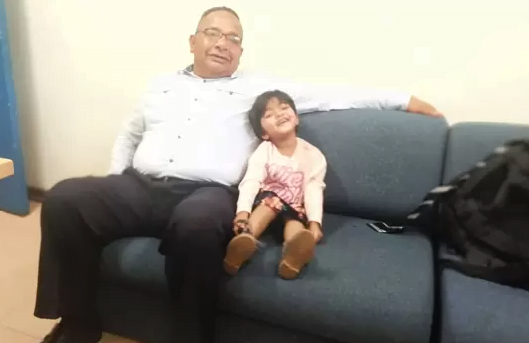 Durban – DESPITE an alleged attempt on his life a week before he was gunned down, a Copesville security co-ordinator believed the incident was a scare tactic.

Subendran Mark Naidoo, 46, was shot dead outside his Indus Road, Pietermaritzburg, home on Friday morning, while reversing his car out of his driveway.

He was on his way to drop off his 3-year-old granddaughter, Kayla, at a crèche, when a gunman, dressed in camouflage attire, repeatedly shot at the car.

In an attempt to protect the child, Naidoo pushed her down into the legroom of the front passenger seat and acted as a shield.

He died at the scene.

It is alleged that more than seven bullets were fired in his direction.

At his funeral on Monday, at the Faith Tabernacle Church, his twin brother Sagran told the POST: “He reversed out the driveway and his wife, who was closing the gate, heard gunshots.

“She saw a guy running in camouflage attire. His granddaughter was in the passenger seat and he pushed her off the seat to save her.”

He said the child sustained a cut to her chin.

A previous attempt was made on Naidoo’s life, when he returned from work last Tuesday, but was not concerned.

“We affectionately called each other ‘boy’. That night he called and said, ‘boy, they tried to put me away last night. Someone shot at me’.”

He said his brother worked as a security adviser at Hulamin, a company that specialised in rolled aluminium products, and that he was “working on something sensitive”.

“He did not want to divulge too much but his exact words were, ‘you know what, boy, if they wanted to kill me, they would have. It is just a scare tactic and I’m not stepping down from what I’m working on’.”

Sagren said he advised Naidoo to take time off from work.

“But he was not that kind of person. He basically uncovered something that cost him his life.”

A family source said Naidoo was in charge of investigating irregular security contracts at the company and allegedly uncovered underhand dealings.

Sagren said Naidoo, a father of two, formed the neighbourhood watch in Copesville and became a police reservist after matriculating.

“He loved the outdoors and was supposed to go to the White Mountain Acoustic Festival (in the central Drakensberg) at the end of the month. He also had a passion for motorcycles and deep-sea fishing.”

Sagren said it was a trying time for the family.

“He was the one who held us together. It is not fair that we had to lose him.”

Naidoo’s step-sister Christine gave a eulogy at the funeral and said her brother had just bought the vehicle he was killed in.

“He achieved so much in a short period of time. The Lord knew what he was doing, so we can’t question this. It was his time.”

The cremation was held at Mountain Rise Crematorium.

Noma Kanyile, the group communications manager for Hulamin, said the company provided Naidoo with security protection, after it heard about the first attempt on his life, last Tuesday.

She said Naidoo had a long contractual association with Hulamin, through his previous employers, and he officially joined the company in 2018.

Kanyile said she could not speculate on the allegation that the killing was work-related.

The chief executive, Richard Jacob, added: “All of us at Hulamin are deeply saddened by the loss of our friend, colleague, and loyal co-worker. Our condolences and prayers are with his grieving family and friends, during this most difficult time.”

He was described as diligent, trustworthy and committed.

Police spokesperson, Lieutenant-Colonel Thulani Zwane, said a case of murder and attempted murder had been opened.

He said Naidoo sustained multiple gunshot wounds, including one to the head, and died at the scene. A female neighbour, 15, was grazed by a bullet.