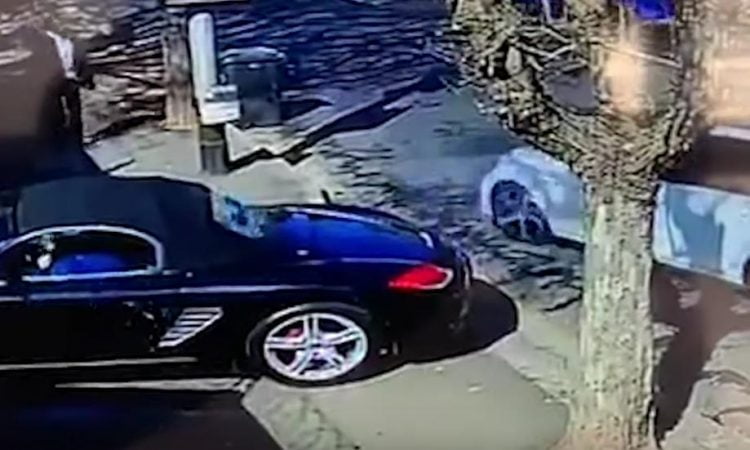 CCTV footage of an assassination attempt on Simon Rudland, co-owner of the Gold Leaf Tobacco Corporation and a member of the Fair Trade Independent Tobacco Association (FITA), has surfaced online.

Rudland was seriously injured in the apparent assassination attempt in Johannesburg on Wednesday morning.

The footage below was sent to The TellitallSA on Thursday morning. You can see the Porsche Boxster Rudland was travelling in pull up and then the white VW Golf GTI with the suspects arrive behind him.

After the shooting, he immediately made his way to hospital.

Two assailants in the white car waited at the offices of FITA in Norwood, Johannesburg. As Rudland and his lawyer arrived for a FITA meeting, one man fired nine shots with a handgun to Rudland’s head area. One bullet struck him in the neck. He has since been hospitalised and is being kept in intensive care. The source said the suspects had been identified by way of CCTV.

“It comes as a shock to all of us,” Mnguni said. “At this stage police are investigating. This is something we take seriously.”

Mnguni said Rudland has not yet been able to communicate as to what exactly happened. He said he would speak to Rudland during the course of Thursday morning.

“We have to allow Mr Rudland to recover.”

Mnguni said he was not aware of any threats that Rudland may have received prior to the incident. “Our priority now is to ensure that Mr Rudland is safe.”

FITA has since released a preliminary statement confirming “the occurrence of an incident outside our offices yesterday. In this regard FITA will issue a statement during the course of today.

“We further confirm that members of the SAPS attended at our offices for purposes of conducting their investigations and they were inter alia handed CCTV footage of the aforementioned incident.

“There will be no further comment on this issue for now and we ask that the SAPS be allowed to conduct their investigations,” the statement concludes.

Last year, City Press reported that about 26.8% of all cigarettes sold in South Africa were “illicit” and that this trade was dominated by one local company: Gold Leaf Tobacco.

Its directors are Johannesburg-based Ebrahim Ahmed Adamjee and Rudland, who is a Zimbabwean.