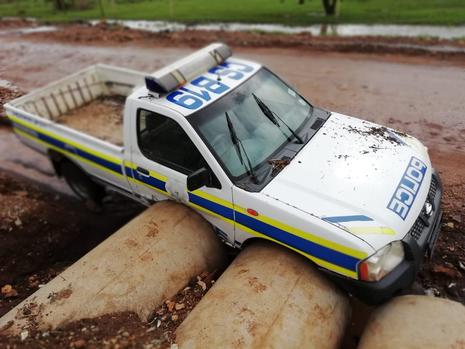 A 51-year-old police sergeant from the Senwabarwana police station was rescued on Thursday morning by local community members after a police vehicle he was driving was trapped in floodwaters along the Machaba-Avon Marobjana road at ga-Kgoshi Maleboho, Limpopo police said.

Spokesperson Brigadier Motlafela Mojapelo said the sergeant was part of a team of members who responded to business robberies in progress at two schools at Machaba village.

“This after receiving a call about an unknown number of suspects who arrived at Ralekwalane High School, tied security officers on duty, broke the doors and stole three laptops. The alleged suspects then proceeded to Machaba Primary School where they took one laptop and two projectors,” Mojapelo said.

“The police, using three vehicles arrived at the said schools within minutes and immediately started following up certain leads as the suspects had already fled the scene, despite the heavy rains in the area last night.”

Mojapelo said the vehicle driven by the sergeant was trapped in water flooding the gravel road he was travelling on and the member managed to climb on top of it.

“Community members realizing the danger he was in, bravely swam towards the stranded member and rescued him, just in time before the police vehicle was swept away.” 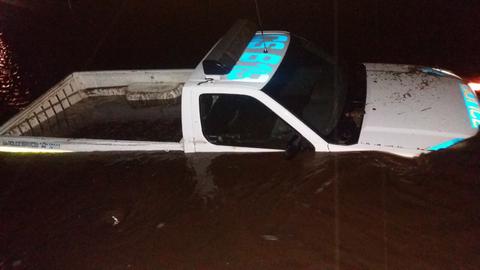 Community members rescued the policeman just before the van was swept away. Pic supplied

Limpopo police commissioner, Lieutenant General Nneke Ledwaba has thanked members of the community for coming to the rescue of our member who almost perished in the floods.

“The cordial relationship that we have created and continue to strengthen between ourselves and community members was clearly manifested by these acts of bravery,” said Ledwaba.

The suspects in the business robberies are still at large and a manhunt is already underway to trace them. African News Agency