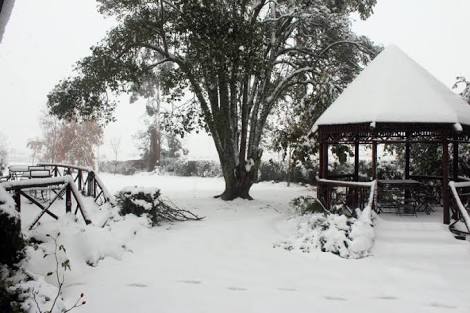 Durban – KwaZulu-Natal communities in western parts of the province are being urged to prepare for heavy rains and possible hail today.

The South African Weather Service issued a ‘watch’ for severe storms over the western interior.

The Department of Co-operative Governance and Traditional Affairs says Disaster Management teams have been placed on standby.

MEC Nomusa Dube-Ncube says teams are ready to jump into action should there be any localised flooding or severe hail.

Dube-Ncube is urging communities in western parts of KwaZulu-Natal to take the necessary precautions.

She says officials are monitoring the situation, especially in low-lying areas prone to flooding.

The department says it has been in contact with several municipalities – including Amajuba, uThukela, Dr Nkosazana Dlamini-Zuma, Impendla and the Greater Kokstad area, among others, to ensure they are properly prepared.

Dube-Ncube is advising parents to ensure their children use safe roads to get to and from school.

She says teachers must not release pupils in dangerous conditions.
Meanwhile, there is a 60 percent chance of showers and thunder showers in parts of the province today.

You can find your maximum temperatures for Friday below:
Durban, Pietermaritzburg and Mooi River – 20
Margate – 18
Richards Bay and Newcastle – 24
Ladysmith and Ulundi – 22
Kokstad and the Drakensberg – 19

Possible 10-20cm on the high peaks on the central and southern Drakensberg and Lesotho between late Friday night and Saturday morning. At this point there is no consistent data indicating low-level snow and the freezing level is quite high.