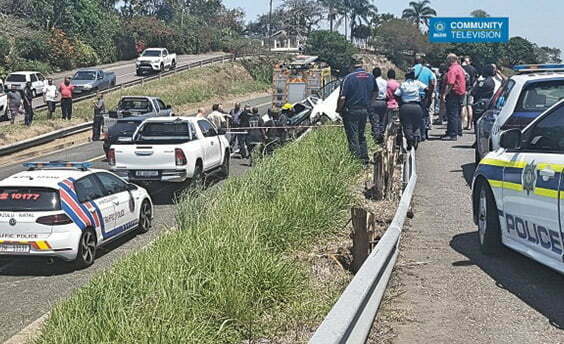 Durban – A manhunt for suspected house robbers is underway in Berea West, Westville after a gang crashed their car on the M13 during a high speed chase down Fields Hill this morning.

Blue Security community and media liaison officer Andreas Mathios said a staff member from LAD Security had spotted the suspects in a vehicle entering a cul-de-sac in Padfield Park in Pinetown late this morning.

The number of suspects on the run, who were driving a vehicle that is wanted in connection with a house robbery in the Western Cape, is believed to be between two and four. They fled the crashed vehicle on foot.

“The suspects behaved suspiciously and avoided contact with the officer before suddenly speeding off out of the suburb and onto the M13 Highway down Fields Hill towards Durban. The security officer called for back up and other security companies including Blue Security as well as the SAPS Trio Crime Unit, the SAPS Durban South Dog Unit, the Metro Police Specialised Unit, and Tracker SA operatives arrived to assist the company,” Mathios said.

“The gang eventually lost control of the vehicle near Westwood Mall, where it crashed across the centre median. The occupants jumped out of the vehicle and fled on foot into the nearby suburb. Police are still busy searching the area for the suspects,” Mathios said.