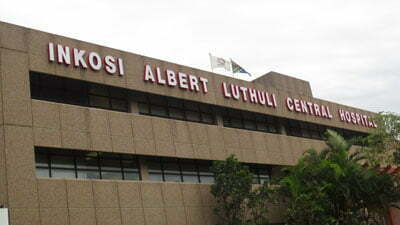 Durban – A neurosurgeon at Inkosi Albert Luthuli hospital has been charged with conspiracy to commit murder.
Dr Anand Rapiti, 43, allegedly hired one of his patients to kill his brother-in-law, who is also a doctor at the facility.

The plan backfired when the hit man alerted police.

The Directorate for Priority Crime Investigation (Hawks) arrested Rapiti at the hospital on December 18.

He spent Christmas in Westville Prison and was granted R5000 bail when he appeared before magistrate Kevin Bruorton last week.

On one occasion, according to a source who asked not to be named, Rapiti, who is an avid hunter, suggested Naidu be invited to a hunting outing where his accidental death could be staged.

Instead Maneveldt tipped off police.

Prosecutor Calvin Govender, who opposed bail, argued that Naidu’s life was in danger. The matter was adjourned and the application then came before magistrate Bruorton.

Rapiti’s legal representative, advocate Paul Jorgensen, read out a statement from his client in support of the application.

Rapiti, who is single and lives with his mother in uMhlanga, said he did not resist arrest. He admitted knowing the State’s two witnesses – Naidu and Maneveldt – “but I lack the ability or intent to interfere with such witnesses”.

“My continued incarceration during this matter in court will not be in the interests of society. I will not endanger the safety of anyone in society.”

Rapiti said he intended pleading not guilty to the charge he faced.

He told the court he used prescription drugs for epilepsy, suffered depression, required consultations with psychiatrists and needed medication for his insomnia.

Rapiti said every two weeks he needed an injection to treat his hormone imbalance.

Prosecutor Mohamed Riaz Hoosen said the State would not oppose Rapiti’s bail application because of his medical conditions and that his personal details had been verified.

Hoosen also read out a statement written by Hawks investigating officer Benedict Chonco, that provided the background to the charge Rapiti faced.

“Maneveldt agreed to do the job because Rapiti told him there was an ex-military person also arranging a hit man from the Glebelands hostel. So he realised that if he did not take it and alert police, an innocent person would be killed,” said Chonco.

Maneveldt received R10000 from Rapiti, which he gave to Chonco and was stored as evidence.

Chonco said three undercover operations were conducted with audio and video recordings gathered from the meetings between Rapiti and Maneveldt, who received a further R25000 payment.

“When arrested, Rapiti believed the murder was still going ahead, the arrest was just a delay, and Maneveldt was introducing him to the hit man.”

Choco said Rapiti made several calls to Maneveldt, asking about the delay, some of which were recorded.

Chonco told the court that Naidu, who was supposed to be killed, contacted him and pleaded that he didn’t contest bail for the sake of his wife.

Naidu is married to Rapiti’s sister Nadine, who is also a doctor.

Granting bail, Bruorton said: “The alleged victim (Naidu) in this matter is not opposed to your release, based on the fact that he’s married to your sister, and this is the reason he doesn’t want you to be incarcerated further.”

He stressed that Rapiti and others should not interfere with or threaten witnesses and that he should report to Durban North police station once a week.

KZN Health acting head of department, Dr Musa Gumede, said they were “shocked and dismayed” at the allegations against Rapiti.

Gumede said an internal inquiry would be conducted, and if Rapiti was found guilty in court, the matter would be reported to the Health Professions Council of SA to take the appropriate steps. Sunday Tribune