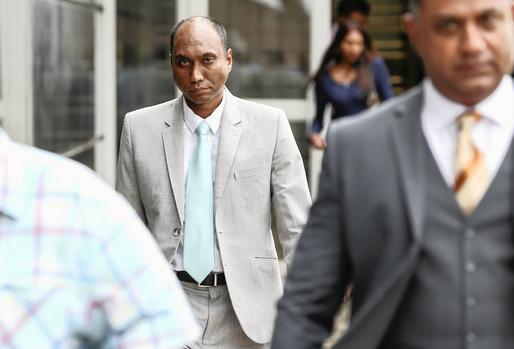 DURBAN – A family feud is what drove a neurosurgeon at Durban’s Inkosi Albert Luthuli Central Hospital to allegedly order a “hit” on his brother-in-law, who is also a doctor.

Another family squabble in September, according to a well-placed source who asked not to be named, hastened Dr Anand Rapiti’s intent to have his sister’s husband, Dr Melvin Naidu, killed.

Rapiti, 43, made a brief appearance in the Durban Magistrate’s Court this week, on a conspiracy to commit murder charge. Magistrate Vanitha Armu adjourned the matter to February for further investigation.

Rapiti was arrested at the hospital last month by members of the Directorate for Priority Crime Investigation (Hawks), over his alleged plot to have Naidu killed.

Hawks investigators were tipped off by one of Rapiti’s patients, Desmond Maneveldt, who was allegedly hired by Rapiti to kill Naidu.

At a previous court hearing, Rapiti was granted R5 000 bail and indicated he intended to plead not guilty.

During the bail hearing, Rapiti said in a statement read out by his legal representative advocate Paul Jorgensen, that he lacked the ability to interfere with the State’s witnesses (Maneveldt and Naidu).

Rapiti said he used prescription drugs for epilepsy, suffered depression, required consultations with psychiatrists and needed medication for his insomnia.

He also said that every two weeks he needed an injection to treat his hormone imbalance.

At the same hearing, Hawks investigating officer Benedict Chonco had his statement on the background of the matter read into the court record.

Chonco said Rapiti approached Maneveldt about having Naidu killed in October, and made a R10 000 down-payment, which Chonco collected and stored as evidence.

Chonco said three undercover operations were conducted, with audio and video recordings gathered from the meetings between Rapiti and Maneveldt, who received a further R25 000 payment.

When he was arrested, Rapiti was under the impression that the murder was still going ahead, the arrest was just a delay, and Maneveldt was introducing him to the hit man.

The source said that the 50-year-old Naidu believed that Rapiti might be working with others to have him killed, and asked police to investigate the possibility.

According to the informant, Naidu, an orthopedic surgeon who has practices in Durban and Ladysmith, expressed great concern at how Rapiti came into possession of R25 000, because for the 32 years he knew him, his brother-in-law never kept large sums of cash.

Naidu believed that his passport picture and expired driving licence were handed to the hit man by Rapiti, said the source.

“The hit on Dr Naidu was supposed to have happened in November, while Anand (Rapiti) was on a cruise ship with his parents at the time,” said the informant.

“Melvin (Naidu) and his wife (Nadine) returned from the UK in 2007 and lived with his wife’s parents in uMhlanga. That is when Melvin kept personal documents at the home.

“Anand also moved in with his parents thereafter. Naidu had a fallout with his in-laws after a family dispute.”

The source said the feud caused Naidu to cut ties with his wife’s family and he did not allow his children to visit their grandparents’ home.

“While on holiday with his wife in July, Melvin suggested to his wife (also a Doctor) that maybe it was time for them to reconcile with her family and mend bridges.

“In September, when his wife was away in Barcelona at a conference, his mother-in-law tried to tell me how to care for his children, which he did not appreciate, and they argued, said the source.”

The source added that Naidu believed his mother-in-law might have told Rapiti about their argument and this might have triggered the plot to murder him.