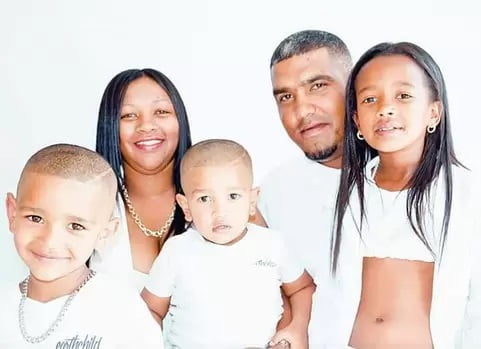 Cape Town – An innocent dad has died in a hail of bullets and a seven-year-old boy from Lavender Hill has been injured after heartless thugs opened fire in Fawley Court on Wednesday afternoon.

The heartbroken family of Eugene “Stompie” Stole, 31, are still in shock after the young father of four was shot multiple times while walking home from work at about 2pm.

Tyrese Kiel was struck while waiting for the soup kitchen to open and was taken to hospital.

Eugene’s widow, Illana, 30, says she was at work when she received an urgent call to come home as her husband had been shot and died on the scene.

Tyrese’s grandmother, Esme, 57, says she got a fright when she saw the Grade 1 pupil run into the house after a bullet ripped through his abdomen and exited his back.

Mom Imaan Miller, 29, says her son told her he was waiting for the soup kitchen to open when thugs started shooting at Eugene.

“He ran into a house and so did Eugene, but they didn’t see that he ran out the back and ran home,” a shocked Imaan says.

“My sister and her husband rushed him to hospital.

“They told us he is stable now and we are waiting to hear if they will need to operate, but we were all so shocked that they would shoot a child and an innocent man like that.”

Police spokesperson, Captain FC van Wyk, confirms the incident and says officers are now investigating a murder and attempted murder case, with no arrests made as yet.

Illana says she hates the men who shot her husband, who worked hard to provide for his family.

Eugene worked at Bowler PET plastic manufacturer and Illana believes the shooters were jealous of him.

“I hate them. They have taken my children’s father away from them and baby Havaniah is only one year old.

“We have been together for 12 years but married for eight years.

“Together we have four children and they are Zac, Zion, Zara and Havaniah.

“I think this was jealousy because he always worked for everything he had.

“He was not a gangster. We can’t believe he had to die like that.”

Anyone with any information is asked to call Crime Stop on 08600 10111 or Steenberg SAPS.