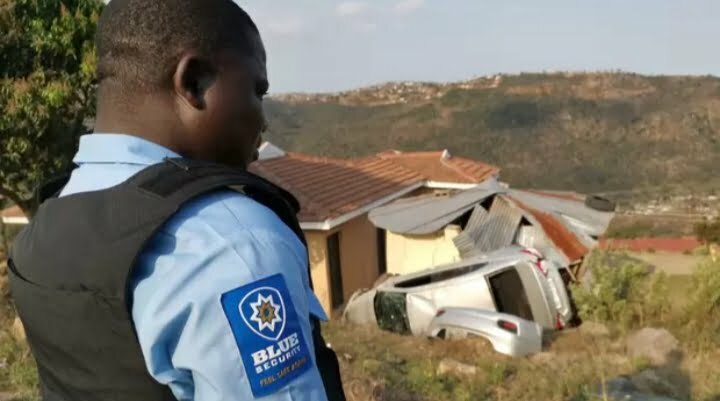 Durban – Two men were nabbed following a high speed chase in the Highway area that ended with the suspects’ getaway vehicle crashing into a house.

On Tuesday afternoon, reports of a housebreaking were circulating via community watch social media groups in the Waterfall area.

According to Blue Security’s Stephen Wimborne, a tactical officer was patrolling the area when he spotted the vehicle, as per the description given on the groups.

“Our community officer joined the pursuit and the suspicious vehicle continued to drive at a regular speed, until a few minutes later, the suspects realised that the officer was following behind them,” Wimborne said.

He said the suspects accelerated and made their way out of the suburb driving for about 10 minutes, in the direction of Emolweni with both tactical community officers and the neighbourhood watch member in pursuit.

“The driver of the getaway vehicle lost control of the car and it crashed down an embankment. All of the suspects jumped out of the vehicle and ran in different directions. Two suspects ran in one direction and the other three suspects ran into nearby bushes in a bid to evade arrest. Our tactical community officer and the neighbourhood watch member gave chase and managed to arrest two of the suspects, one of whom was found hiding in a nearby house in a bid to evade arrest. The suspects were handed over to members of the Hillcrest SAPS at the scene,” Wimborne said.

One of the suspects had sustained a serious head injury during the crash and had to be treated by paramedics.

“ER24 paramedics transported the suspect to hospital under police guard. The Hillcrest SAPS has cordoned off the scene and are investigating the case,” he said.

Wimborne commended the tactical community officer, neighbourhood watch group and the police for their swift team work that led to the arrests. Three suspects remain at large.

4 cops charged with kidnapping, but SAPS has not suspended them