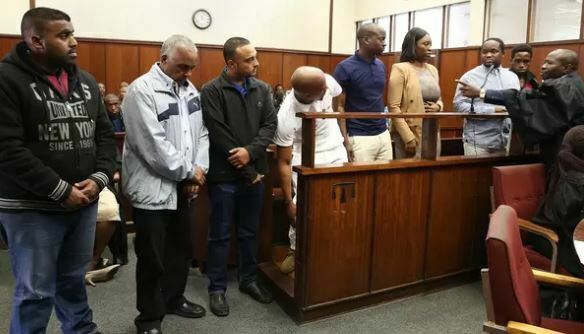 Durban – The four Inanda police officers arrested for kidnapping, assault and extortion at a truck yard in Springfield Park recently have not been suspended from the force, the Durban Magistrate’s Court heard on Friday.

One will report weekly to the station where he works as part of his bail conditions while the others will have to sign the bail register at stations closer to their homes.

At their bail application on Friday, investigating officer Detective Captain Paulos Sithembiso Vezi’s affidavit described how they were arrested.

One of the accused placed a call to arrange a meeting to receive clandestine money, but the cellphone receiving his call was at the wrong place – it was answered by the victim who was at Greenwood Park police station reporting the crime. His phone was placed on loudspeaker mode while the arrangements were being made.

Police then followed the “victim” to the meeting place and caught three men, who turned out to be fellow officers.

On Friday, the four cops and a security guard, who had appeared in court the week before, were joined in the dock by three businessmen, including a father and son. They were each granted R2 000 bail.

They also face charges of corruption, assault with intent to do grievous bodily harm and attempted murder.

Vezi’s affidavit gave further details of how an employee was requested by his boss at 1am on July 24 to go to China Mall to receive a consignment of clothing. He hired a car with a driver and was met by men in a car who guided him to a truck yard where they and others in a waiting car assaulted them with their hands, sticks and firearms that they fired at close range, causing one of their victim’s eardrums to burst.

During the fracas, a woman arrived and handcuffed the employee to a steel bar that was pegged into the ground.

They released the driver, who was bleeding profusely from the head, and ordered him to call the employee’s boss to collect R500 000 cash “because they had stolen” a container and trailer “which had cost them millions”.

The driver and the employee’s boss then reported the matter to Greenwood Park police, when the incriminating call came through.

At the agreed meeting place, Greenwood Park police arrested three men who identified themselves as police, with police-issue firearms and bullet proof vests. The suspects took the Greenwood Park police to the truck yard where they found the employee handcuffed, injured and under guard. He had been denied food and water during his hours of capture.

The first of the eight to be arrested were policemen Lethuxolo Zulu, 38, Bongani Nzama, 29, Emmanuel Dlamini, 26, and policewoman Nelisiwe Khuzwayo, 29, along with security guard Mhlonipheni Mdlalose, 19.

Last week, they were joined by the business trio, Mark Pillay, 27, Hemal Bhugwandeen, 33, and his father Moham Bhugwandeen, 71.

In the early stages of Friday’s hearing, lawyers representing the eight objected to the press being allowed to photograph them in the dock.
Khuzwayo said, through her lawyer Leo Govender, that it would jeopardise her future career in the police force were her photograph to appear in the press.

However, magistrate Vanitha Armu allowed photographs, stressing that there was enormous public interest in the case.

She ordered them to hand in what firearms the investigating officer had not taken and warned them to appear again on October 3.

The eight were ordered not to interfere with two complainants, Bruce Mwayo and Temesgen Yade.

Neither the court, nor court documents, specified who of these two was the driver, the employee or the boss. However, the investigating officer’s affidavit mentioned that the wife of one of the complainants had been intimidated.

Source: The Independent on Saturday