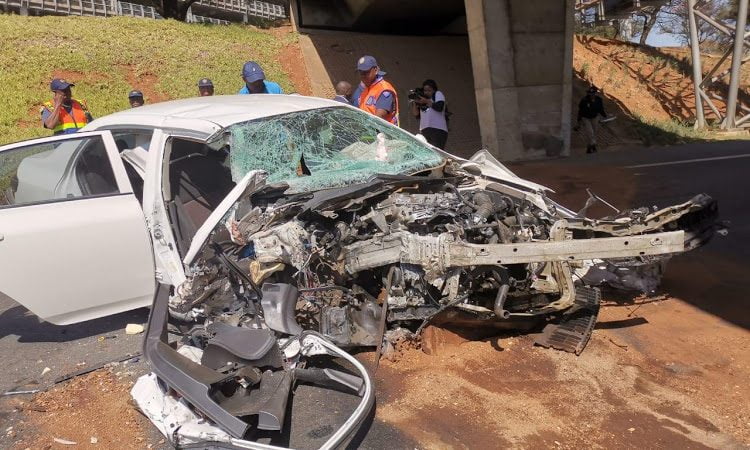 “We do not know why he was driving to the airport, if it was to catch a flight or if it was to collect someone. What we do know is that he was alone in the car,” Papa Leshabane earlier told TellitallSA.

He described the accident scene as horrific.

“That car literally disintegrated. There is absolutely nothing left of it. It’s smashed into millions of pieces. I can’t even begin to imagine what led to this accident.”

Leshabane said in a statement issued just after 1pm: “It is with profound sense of loss and deep sadness that we confirm the passing of Gavin Watson.

“He was involved in a motor vehicle accident around the OR Tambo International Airport this morning. We would like to urge the public and the media to give the family space and time to mourn his passing privately. The family will not be conducting any interviews.”

Watson died when the car he was driving, a company Toyota Corrolla, hit a bridge pillar near the R21.

Leshabane said the Watson family had identified his body at the mortuary.

Bosasa was implicated in a string of graft allegations involving the awarding of contracts with the Department of Correctional Services.

A TimesLIVE reporter said police and metro officers were on the accident scene around midday but the wreck had been removed. The pillar the car crashed into, under a bridge, had visible paint marks on it. Broken plastic covers and lights lay scattered on the road.

Police spokesperson Lt-Col Katlego Mogale said: “It is reported that the man was driving into the airport precinct when he allegedly lost control of his vehicle and collided with a concrete pillar holding up a highway bridge.

“The victim was certified dead on the scene by paramedics and a case of culpable homicide has been opened for investigation.’

African Global Operations chairperson Johannes Gumede said he had seen news reports but could not confirm details: “We are waiting for the family to confirm.”