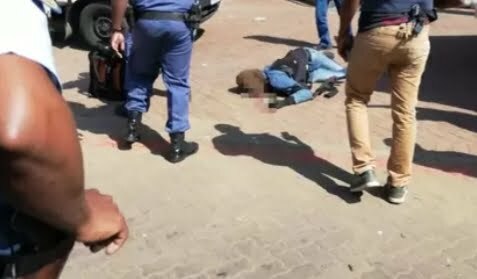 Durban – Two people have been shot dead and another wounded during a cash in transit heist outside Bridge City Mall in KwaMashu on Monday.

Police have not officially released a statement on the incident but it is alleged that a gang of seven men tried to hold up CIT guards transferring money to their vehicle on Monday.

It is alleged one of the guards was shot and wounded and he was rushed to hospital.

Pictures of the scene circulating on social media, show a man on the floor wearing a balaclava and handgloves with a rifle beside him. He has blood flowing from a wound under his balaclava.

He is also wearing blue jeans and a blue shirt and is laying on his stomach.

In the same picture another man is laying on the floor near the escalators also with blood around his body.

According to the PCCA-KZN Active WhatsApp group customers ducked for cover when gunshots rang out in the mall.

Several shops hit their panic buttons when the shootout occured.

Police are still searching for the men who escaped.