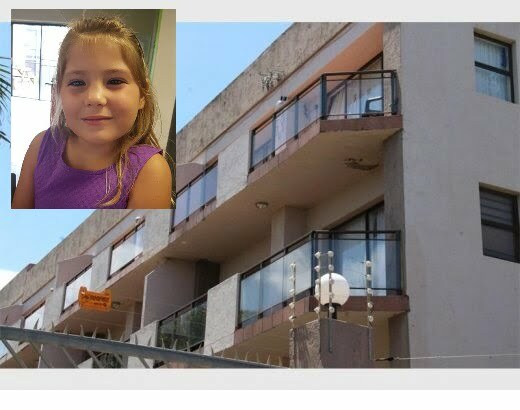 Just three days before Christmas, eight-year-old Bronwyn Eloff of Margate plunged three storeys to her death from a block of flats in Manaba near Margate on the KwaZulu-Natal South Coast.

Her grandfather, Jan Eloff described Bronwyn as a fun-loving, outgoing and bubbly child, adding that her death had been a terrible shock to the family, South Coast Herald reports.

Speaking to the Herald, Jan said Bronwyn was playing with two friends a block of flats in Garrick Avenue on Saturday, December 22 when the tragedy occurred.

Police spokesman, Sergeant Sibu Ncane said Margate police were alerted and responded to the scene at about 4pm.

“The girl and a man fell from the balcony of the residence. They were taken to hospital, where the young girl died from head injuries.”

It is believed the 25-year-old man, who had apparently tried to save the young girl, suffered a broken hip.

Jan said the incident has ‘raised many questions’ and the family was awaiting the results of the police investigation.

While he feels what happened was indeed an accident, he said he questioned how the child could have slipped and fallen over the glass balcony balustrade which is more than waist high.

He added another point was that Bronwyn was petrified of heights, and couldn’t be lifted more two feet off the ground.

“We assume she toppled over backwards as she landed on her back,” said the distraught grandfather.

Bronwyn Eloff, who attended Suid Natal Primary, died after falling from a balcony.

He thanked the staff at Netcare Margate Hospital for all they had done to try and save Bronwyn’s life.