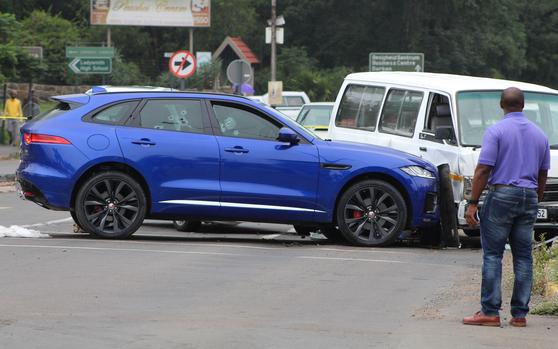 Durban – A senior Alfred Duma (Ladysmith) local municipal employee was gunned down in an ambush on Thursday morning.

Oscar Hlatshwayo, the municipality’s executive director of engineering and infrastructure services had just dropped off his two children at a local school when he was caught in a hail of bullets.

An eye witness who asked to remain anonymous said Hlatshwayo was driving his blue Jaguar down Francis Road when he was ambushed.

“There were five cars between his and mine. As he drove past the KFC just a few meters from the robots at the intersection, gunshots rang out. He lost control and he did not stop at the intersection and collided with a minibus taxi. The gunmen were not in a car as there was no visible one which could have been used as a getaway car,” said the witness.

Siya Maphalala, the municipal spokesperson said they were still at the scene and that the body and the car had still not been removed.

“The police are still in charge of the scene. Hlatshwayo has worked for the municipality for about 15 years. At this stage, it is not clear what the motive for the killing could be but we will issue a statement once we have more details on the matter,” Maphalala said.