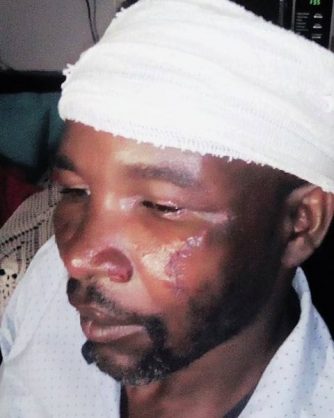 Radius Masukume, who was stabbed while trying to stop a woman from being raped in a field in Cape Town, has been nominated for a SA Men of the Year Award for his brave actions.

The awards, which started as a national campaign against gender-based violence in 2015, recognise positive male role models in society.

The campaign has honoured legends such as advocate George Bizos, entrepreneur and property developer Richard Maponya and athlete Bruce Fordyce, among others.

“The brave and heroic deeds of Mr Radius Masukume deserve a special recognition, not only by the people of Cape Town but by all South Africans,” awards chairperson Bongani Ngomane told News24.

He said that even though the awards only focused on Gauteng this year, due to a limited budget, they felt compelled to honoured Masukume.

The awards committee and Social Development Men’s Forum said that his actions epitomised the campaign’s “don’t look away” and “not in my name” messages.

With budgetary constraints, they were able to provide transport and accommodation for him once in Gauteng but hoped a kind person would sponsor his flights.

The awards take place at Carnival City on November 27 and nominations close at the end of October.

Reacting to the news, Masukume said he was very happy and would consider attending, although he also had to think about the running of his construction business.

The 49-year-old previously told News24 that he didn’t think twice before intervening when he heard the woman’s cries for help while walking to work in Table View earlier this month.

He was recovering after he was stabbed multiple times while fighting off two men who were raping the 45-year-old woman in a field.

“It’s how I was raised. I am a son of a chief,” he told News24 at the time. He believed men should protect women because they were instrumental in the raising of children and passing on of valuable skills.

The father of six children – aged 6 to 29 – said he was aware that many people would have kept on walking instead of running into danger.

“I am happy to say I am recovering and am very strong.”

Keep the Energy, a Facebook group which focuses on gender-based violence, posted about the incident and also set up a fundraising page to reward him for his selflessness, which has already raised thousands.

Masukume was pleased about the fundraising efforts and wanted to use it to help others.

“In Du Noon, women are living alone and old ladies are being left at home alone. They are being abused and raped. Maybe we can do something to help them.”

Western Cape police have not yet arrested anyone for the cases of attempted murder, attempted robbery and rape.