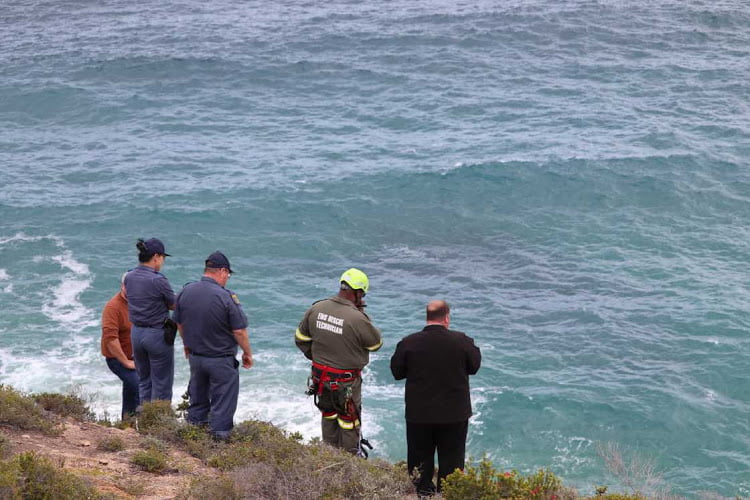 A search for a missing mother and her two children who disappeared on Tuesday night has ended after a vehicle resembling theirs was located in the ocean at the foot of a cliff.

By late Thursday morning rescuers found part of a wrecked VW Caravelle at the foot of the cliff in Voëlklip, on the outskirts of Herolds Bay.

The vehicle, which is totally submerged in water, was spotted at low tide when a searcher noticed a tyre sticking out from the water, HeraldLIVE reported.

By 11am police revealed the rescue had turned into a recovery operation, but confirmed no bodies had been located.

This comes after a huge search for the missing mother and her children was set to resume in Herolds Bay near George on Thursday morning.

Officially, police are stating a vehicle matching the Caravelle was located, but until the vehicle is hoisted out of the ocean, they cannot confirm it is the one belonging to the missing family.

The search for Heidi Scheepers, 35, her daughter, 6, and son, 2, comes after they disappeared at about 6pm on Tuesday, sparking a huge search operation in the Herolds Bay area.

The search resumed at first light at about 5.30am, while the tide was still out.

It came to a halt on Wednesday afternoon after parts of a vehicle — believed to be the family’s — were found at the bottom of the cliff.

Debris from the VW Caravelle — the same colour as the missing vehicle — was found on nearby rocks and the vehicle was discovered a short while later on the sea bed.

On Thursday morning, authorities had a tow truck on standby at the scene to assist in lifting the wreckage from the water and onto the nearby rocks.

The rescue helicopter, police divers, search and rescue personnel, medics, NSRI and other role players were at the site as the search continued.

Southern Cape police spokesperson Captain Malcolm Pojie said due to rough sea conditions, divers had not dived yet, but a reconnaissance of the area was done to locate more debris.

“A search was done and a car tyre was seen submerged in the water.

“A further inspection revealed that it is a Caravelle.

“Drivers went into the water but, due to rough seas and the high tide, the operation was halted pending the tide going out,” Pojie said.

“A heavy-duty lifting tow truck has been connected to the vehicle in the interim, but the car will only be hoisted up later once the tide goes out.

“At this stage we cannot confirm if any bodies are in the vehicle.”

Pojie said when the tide moved out, divers would go back into the water and the car would hoisted out.

The cliff is about 100m high and rescuers abseiled down its face, but were unable to recover any of the vehicle parts.

It was initially feared the family had been abducted, with police in the Eastern and Western Cape placed on alert.

The car parts were found near the fishing and picnic spot Voëlklip, on the outskirts of the town.

The family had gone for a walk on the beach in Herolds Bay before their disappearance.

Heidi’s husband, Ettienne, 36, had gone with them to the beach, but left on foot to check on some of his businesses.

The couple own the Herolds Bay Cafe and run the Garden Route Property Management group that manages several holiday homes in the area.

After Heidi and the children failed to return home, social media posts asking for help in finding them went viral.

By mid-Wednesday the search had shifted to the rocky cliff near the gravel road in Voëlklip.