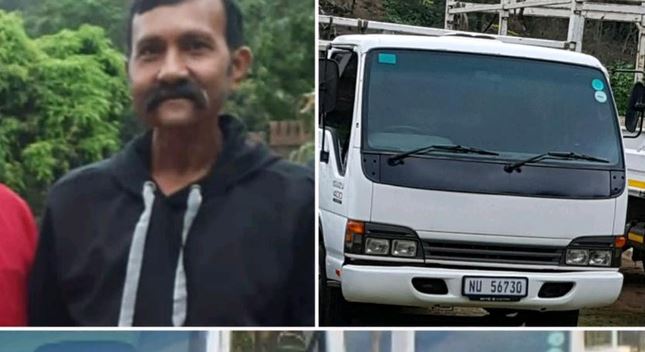 Dhanpall Rajcoomar who has been missing from Tuesday afternoon has been found dead in Welbedacht on Thursday morning.

Rajcoomar from Gillitts, who operated a truck for hire business, was found murdered in Welbedacht near Chatsworth, Durban.

“On Thursday morning, just after 8am, a body of 53-year-old man was found with his hands tied behind the back and his legs were also tied with cable ties,” said Gwala.

She added the victim’s body was found in an abandoned house at Mount Vernon Road in Bellair.

“The victim was reported missing at Malvern SAPS,” said Gwala.

Rajcoomar ran a truck for hire business and on the day of his disappearance he was expected to meet a customer outside the Bellaire Police Station.

According to his customer, they were looking to hire his Isuzu truck to pick up a window frame.

After Rajcoomar failed to return home his family made enquires and obtained CCTV footage which showed someone other than him driving the truck. His cellphone was switched on and rang without answer.

The truck was recovered at a property in Chatsworth yesterday. A search party consisting of family and members of the community was formulated.

The search resulted in Rajcoomar’s body being discovered in an abandoned building in Welbedacht.