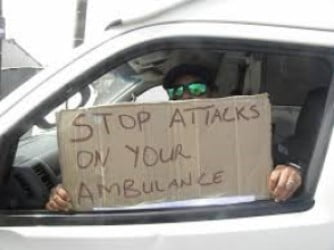 On duty Cape Town paramedics attacked one night after the other

Cape Town – More paramedics have been left traumatised after two more attacks on them while they were helping patients.

In Ravensmead yesterday, a paramedic’s eye was injured after the crew was attacked while transporting a patient to Tygerberg Hospital.

In Atlantis the night before, personnel were robbed of their personal belongings while treating a patient. The provincial health department said all the staff had been offered counselling.

The trend has continued from last year, bringing the number of attacks to 28 in the last 12 months.

“A whole-of-society approach is required to create safe environments which enable people to access the health care they require. Often these attacks take place in extremely vulnerable communities where emergency services are most needed.

“The department urges all residents to protect EMS personnel while they are rendering this very important service. Please report it to the nearest police station should you witness anything,” they said.

In a separate incident, metro officers had a narrow escape when arresting a motorist in Koeberg Road, Milnerton. He allegedly assaulted an officer while resisting arrest.

This after the officers had stopped to assist the suspect when they noticed his vehicle had broken down.

The suspect got aggressive when he was approached by the officers, who then decided to check if the vehicle was stolen.

“The officers sustained no injuries during the process. The suspect was arrested and detained at Milnerton SAPS,” the City said.

Police did not respond to requests for comment by deadline.