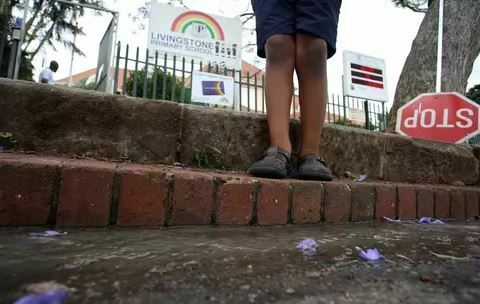 Durban – Parents of children attending Livingstone Primary School in Morningside have complained that dropping them at school every morning has become the worst moment of their day, as children have to jump over raw sewage to get to the classroom.

Parents on Thursday called on the eThekwini Municipality to attend to the leak which had resulted in sewage flowing right outside the entrance to the school. The grandmother of a 10-year-old girl, who asked to remain anonymous to protect the child’s identity, said her granddaughter had to jump over the sewage to get to school.

“I was so angry when my granddaughter said the sewage has been there for a long time. I’m worried about the health of these kids. They don’t know better, but as adults we know what’s at stake here.

“That situation is putting our children at risk. The little ones are very clumsy and they can drop something and without even thinking about it, pick it up. The next day a child gets sick. The municipality has to do something as soon as possible,” she said.

“We’re worried about our kids, especially their health. We don’t know who’s at fault here, but all we know is that the municipality is failing us and they are failing these kids,” said a mother who asked not to be named.

“They are primary schoolchildren, they are still babies and vulnerable and their health should be a priority,” she said.

EThekwini Municipality head of communication, Mandla Nsele, said the municipality was concerned about the children’s health and would attend to the leak immediately.

“We do not want these children to get sick or end up in hospital. We will be sending our technicians to the problem area,” Nsele said.