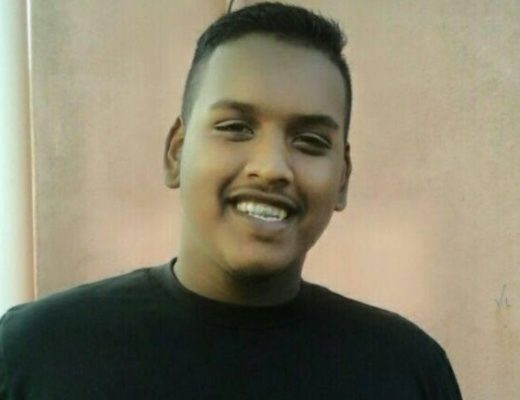 A 19-year-old Chatsworth boy, Dilano Chetty, was fatally shot on Sunday evening allegedly by a relative after a family feud.

His mother, Cheryl Govender watched in horror as her son was murdered in cold blood.

Speaking to Rising Sun Chatsworth, Govender said she had an argument over the phone with her youngest sister and they hurled some insults at each other but little did she know that would cost her, her first born son.

“After the initial argument, there were other phone calls and WhatsApp voice recordings sent to us where we were told that they will shoot us. We thought everything was over and the situation had calmed down but a few hours later, three cars pulled up outside our home and my brother-in-law screamed for my husband to come outside. He said, ‘leave your wife inside and come outside.’ I looked out the window and saw my youngest sister, her husband, my elder sister’s son and future son-in-law. Before my husband could go outside, my son went outside and there was an altercation between him and my brother-in-law,” she said.

Govender described the incident as surreal and said during the fist fight, she heard gunshots.

“I saw my son being shot and fall to the ground. Everything happened so quickly. After he fell to the ground, I saw my relative come up to him and fire another shot before running to his car and speeding off. Our family members left my son and fled the scene. I ran outside but it was too late. My son was dead,” said the distraught mother of two.

She said her niece and her 31-year-old boyfriend, who is one of the alleged gunmen, lived with her for about five months and moved out last month.

“I took care of them, not knowing that he would soon kill my baby. I am still shocked and pray that God helps us get through this,” added Govender.

Sivan Soobramodey from Amawele Emergency Services said the victim sustained two gunshot wounds- one to the neck and one to the leg.

“Dilano was bubbly, energetic, respectable and full of smiles. The community is in shock as this incident occurred in full view of everyone around and the suspect had no respect and value for human life. There could have been other casualties as there were many shots fired. We express our heartfelt condolences to the family during this difficult time and hope that the suspect will be arrested soon. Justice must be served,” he added.

Station commander of Bayview SAPS, Lt Col Balram, said cases of murder and attempted murder were opened and are being investigated at Bayview SAPS.

“Detectives are handling the case and an arrest is imminent,” he confirmed.

Anyone with information relating to the murder can contact Det W/O Dean Naidoo on 031 405-7215.