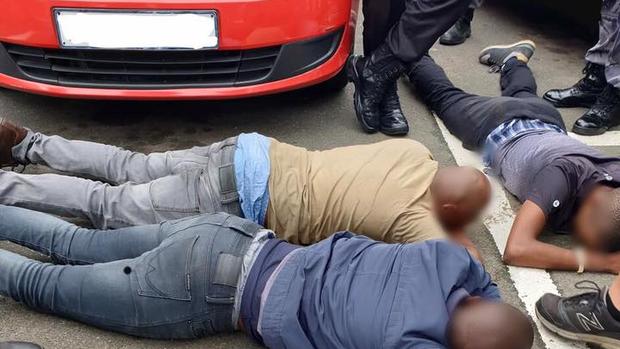 Durban – An Amanzimtoti businessman’s quick action to coordinate the response of local security companies to the scene of a crime in progress led to the arrest of a gang of suspects allegedly behind recent remote jamming incidents in the area.

The vehicle was wanted in connection with a remote jamming incident that had occurred at Victory Spar in Warner Beach where suspects managed to steal a cellphone from a vehicle on Tuesday.

Mathios said the CPPO had put out an alert on its local WhatsApp crime group for members to be on the lookout for the vehicle.

“The businessman spotted the wanted vehicle and immediately contacted local security firms for assistance, alerting them to the presence of the vehicle. A Blue Security CCPO member and ET security armed response officers responded but remained at a distance from the scene,” Mathios said.

“The suspicious vehicle stopped opposite a local Spar supermarket for several minutes and then drove on to Pick n Pay in Winkelspruit where it entered the parking lot,” Mathios said.

Mathios said the security team followed the vehicle into the parking lot.

“After about five minutes the driver of the VW Polo got out and jumped into another car, a white SUV which they had remotely jammed, that was parked in the parking lot. The team of armed response officers then swooped on the scene and arrested three suspects,” Mathios said.

Mathios said the suspects were handed over to the Amanzimtoti SAPS at the scene of the crime.

“Cellphones, a wallet and a remote jamming device were recovered,” Mathios said.

Snowdey said remote jamming devices could interfere with a vehicle’s locking system from as far away as 100 meters or more from where a vehicle was parked. He said it was important for motorists to be aware that remote jammers are not necessarily parked nearby but can be active from a substantial distance away.

Mathios advised motorists not to leave valuables such as bags, cellphones and laptops inside their parked vehicles as there was a risk of remote jamming in parking lots and outside schools in suburbs across the city.