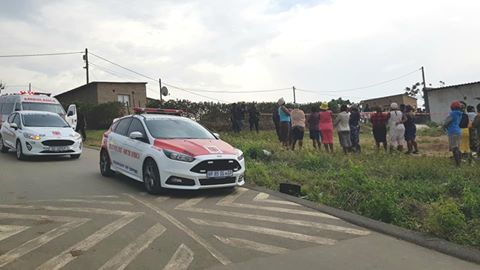 Durban – A 42 year old woman was shot and killed in the presence of her 16 year old son in Hazelmere, Verulam on Tuesday afternoon.

According to RUSA Verulam Operations Centre, they received a call from a resident in the area reporting the shooting around 14h46.

Members of Reaction Unit South Africa were dispatched to the scene and upon arrival the body of the victim was found covered in a blanket on an unpaved driveway.

She was assessed by Medics and found to have sustained a gunshot wound to her head which resulted in her death.

According to the deceased’s son his unemployed mother had disembarked from a taxi near their home coming from a shopping trip in Verulam.

He went to where she had gotten off and helped her carry some of the goods she had purchased.

As they walked towards their home he noticed an unknown man walking behind them. Without warning the suspect drew a firearm and fired two rounds.

One bullet struck the woman above her left eye. Her son fled on foot while the suspect casually walked away and got into a red unknown vehicle which sped off.

The motive for the shooting is unknown at this stage. A spent 9 mm cartridge was recovered at the scene.

According to the Grade 10 learner his unemployed brother was shot and killed before he was dumped in a river in Oakford, Verulam in May this year. His hands and legs were bound with rope. The motive for his murder was also not established.

Victim fights back killing one robber at Pinetown intersection

Brave teen saves herself and friend from brutal killing