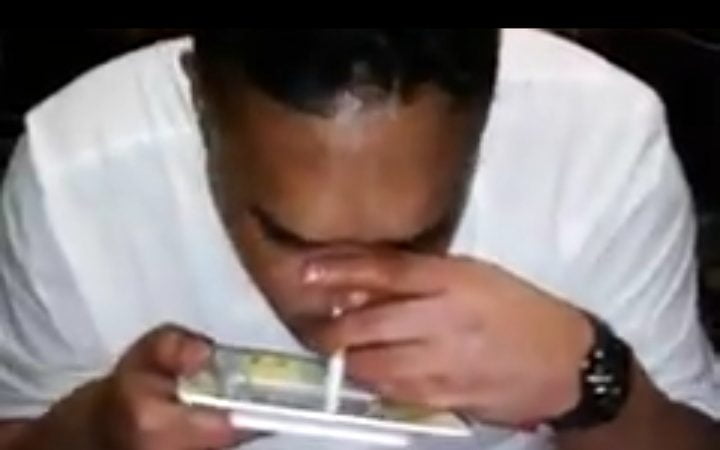 Durban – Convicted killer, Ruwain Meer – who is serving a life sentence for a double murder – has not lost his zest for life if videos taken from inside Westville Prison are anything to go by.

Meer’s high life in prison was exposed this week when a video showing him dancing and snorting what appears to be cocaine made its way on social media. The hired hitman who it seems has in fact gained weight in prison cavorts with fellow inmates while the tunes of Heavy D’s “While we found love” blasts in the background.

[WATCH]: This is one of the leaked videos of an inmate at the Westville prison, doing drugs. The inmate has been identified as convicted murderer, Ruwain Meer. Other videos of inmates doing drugs & using weapons inside the prison surfaced, prompting an investigation. @OpenNewsSA pic.twitter.com/blSYlJQfDl

Looking into the camera cellphone, Meer places it in a strategic position to capture him dancing before panning it around to show a fellow inmate. Inmates in South African prisons are not allowed to possess a cellphone.

The two 30 second videos also show him snorting what appears to be two lines of a white substance, presumably cocaine.

In the wake of the videos, the Department of Justice and Correctional Services has since moved Meer and the other man in the video to Kokstad Super Max Correctional Centre, known as Embongeni.

Meer shot to notoriety in 2009 alongside uMhlanga businessman, Priyen Naidu for the murders of Chatsworth businessman Zainool Fakir, 32, and his 27-year-old nephew, Akbar Sudhoona.

The Durban High Court heard that Naidu had hired Meer to kill Fakir, his business partner at the time as he had planned to start a business on his own.

Fakir and Sudhoona were brutally assaulted and later shot in the head at close range. Their bodies were found in the boot of Fakir’s car in West Riding, Sherwood, on May 14, 2009.

Their cellphones and watches had been stolen, but Judge Mohini Moodley found that it had not been a random robbery, but a planned murder.

The motive is not known, but the State had argued that Fakir had planned to start a business on his own, and Naidu, his business partner, had hired Meer to kill him for R50 000.

Naidu and Meer had pleaded not guilty in 2011 to murder as well as to a charge of robbery with aggravating circumstances. In July 2014, Judge Moodley convicted them of the murders and acquitted them on the robbery charge.

The court found that Fakir had gone to Sherwood with his nephew to meet Naidu, who had not expected Sudhoona.

On that night Naidu and Meer had hosted a “cocaine party”.

“He (Sudhoona) was in the wrong place at the wrong time. It is unfortunate (he) was present,” Judge Moodley said. “They were severely assaulted and each shot twice at close quarters. The deceased must have experienced extensive pain and terror.” Daily News