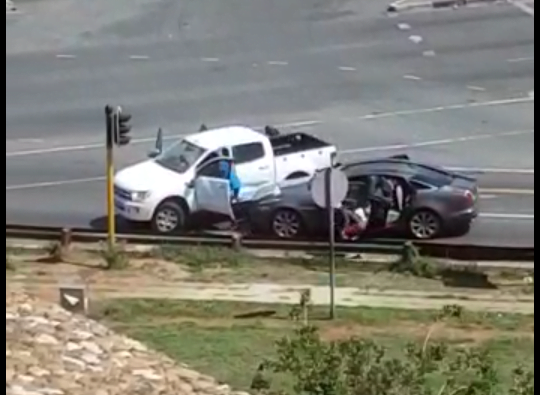 A video has surfaced of a robbery in Crown Mines area of Johannesburg on the intersection of Main Reef road and M2 freeway, a stone throw from Makro.

In the video shared on Facebook by Subarban Control Centre, a white Ford double cab bakkie can be seen blocking a black sedan.

The sedan has all door wide open as the robbers ransack it. A passenger from the the sedan is forced out of the car and at that moment shots ring.

The robbers dart into their get away car and speed off onto Main Reef road towards Johannesburg town.

One of them hangs for dear life on the side of the bakkie since he could not get inside in time.

Crown mines today shooting at the bridge by makro. See how they steal the BMW and then security guards start shooting at them from the Bridge.No regard for the law.

It was reported that security guards from a building nearby saw what was happening and fired shots catching the robbers off guard.