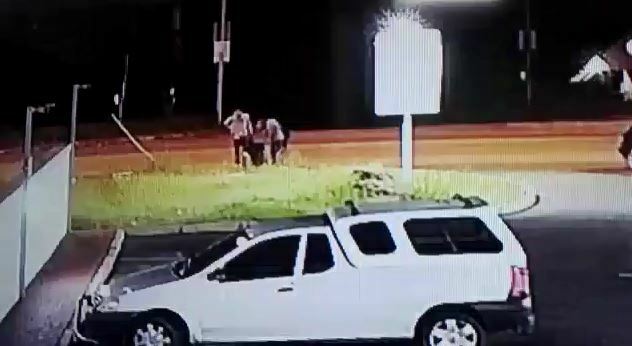 Durban – Four suspects are behind bars in Verulam after they were captured on video assaulting and robbing a man in Verulam on Saturday morning.

In the video, the victim is seen seated on the roadside waiting for a lift shortly after finishing work when the occupants of a dark blue Toyota Conquest stopped and accosted him. Three Indian males approach the victim and begin assaulting him before they stab and rob him of his valuables.

One of the suspects remained in the vehicle which he moves to avoid attracting attention. He later turns the vehicle and uplifts his accomplices before they drive off leaving the victim lying severely injured on the side of the road.

In the attack which lasted more than two minutes, the men stole R250 in cash, a gold ring, a Samsung cellphone and a backpack containing electronic scanning devices from the victim.

The scanning devices belonged to the victim’s employer.

All four suspects were arrested at different locations in Redcliffe by members of Reaction Unit South Africa.

One of the suspects who is 17 years old is believed to have stabbed the victim. He was found in possession of the victims gold ring. Another cellphone was also located in his home. While being interviewed he confirmed that the cellphone belonged to a prostitute who he and his accomplices also robbed and stabbed following the incident on Todd Street.

All four suspects are currently detained at the Verulam SAPS.