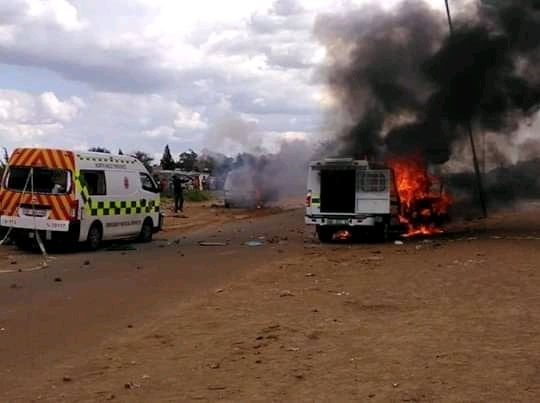 Two police vehicles and a provincial ambulance have been torched and gutted in Boikhutso in an apparent violent retaliation for the deaths of two young children hit by cars in separate incidents.

Both incidents have been declared murders.

“In the first incident, it was reported that at about 10:20 a little girl allegedly ran over the Lichtenburg/Ottosdal road and was hit by a private Isuzu double-cab bakkie. She died on the scene.

“A second similar incident was reported at Kudustreet in Boikhutso at approximately 12:45, when a little boy was hit by a police K9 (dog squad) vehicle. The child was declared dead on the scene,” Naidoo said.

Neither child’s age has been disclosed.

At this point, the enraged local community took the law into their own hands, and turned on the authorities.

“After the second incident, unrest erupted and two police vehicles and an ambulance were torched. Five SAPS members were injured, one was taken to hospital. We have deployed members of the Public Order Police unit… in the area with the aim of restoring peace,” Naidoo said.

Images showed the two gutted police vans, with flames leaping out of the front cabin of the provincial ambulance.