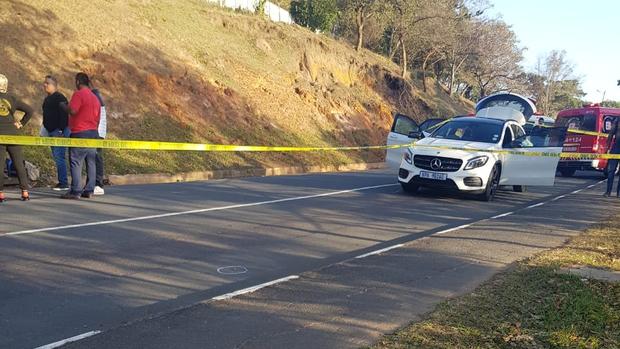 Durban – Police are still searching for a gunman who attempted to kill a Westville resident while he was driving along the M13 in Westville on Thursday.

The Westville resident who has been identified as Ravi Chetty,49, survived an apparent hit on his life when a gunman opened fire with a rifle towards his car on the M13 in Westville.

Dashcam footage from a car travelling behind Chetty’s white Mercedes captured the moment as it took place.

From the footage you can see a car overtake Chetty’s vehicle on the two way road, with many bends.

A hand appears out of the car holding onto what appears to be a rifle.

A burst of gun shots can be heard.

Chetty, who had been driving, slammed on the brakes.

A car behind narrowly avoids slamming into the back of his car.

A man appears to have jumped of Chetty’s car and ran into the bushes alongside the road.

He has not been identified and was not injured in the shooting.

The vehicle the shooters use slows down and then drives off.

A man and woman walking on the pavement about 50 meters away stop when they heard the salvo of gun shots.

The bullets struck Chetty on his arm and face.

The road was closed while police conducted their investigations on Thursday.

In November 2011, Chetty was shot 13 times at close range in the parking lot at Suncoast Casino and Entertainment World.

According to KZN police spokesman, Captain Thulani Zwane, security guards nabbed three suspects who tried to escape after the shooting.

When police arrived and searched the men they found three 9mm pistols.

Two of the men were sentenced in the Durban Regional Court for attempted murder as well as possession of an unlicensed firearm and ammunition.

Chetty is also a fitness fanatic and participated in several Iron Man challenges in Durban.

Westville police have opened an attempted murder docket for investigation.