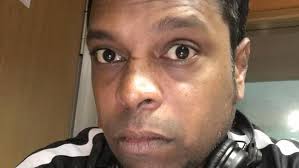 Durban – FORMER radio personality Neville Pillay, 43, is on his death bed, and his family and loved ones are scrambling to help him financially.

The former ECR and Lotus FM presenter and comedian suffered a heart attack and a mild stroke, which resulted in him being partially-sighted.

Compounded by Type 2 diabetes, Pillay’s kidneys are failing and he requires dialysis treatment. He does not have medical aid.

His wife, Carol, and his doctor, who did not want to be named, said the father of two had only months to live.

“The trouble started in October when Neville had a heart attack,” said Carol.

“Neville has been a diabetic for about 20 years. After he suffered the heart attack and was admitted to a government hospital, the staff did not inform us his kidneys were giving up.

“Within two months, his weight blew up from 70kg to 110kg, with 40% of that being water retention. We managed to consult with a nephrologist (kidney specialist) in private practice. He confirmed Neville’s kidneys were in its last stages and he would need dialysis at least three times a week.”

When the couple returned to the government hospital for further medical checks, dialysis, and a possible kidney transplant, they were turned away due to Pillay being classified as morbidly obese.

“He was regarded as being a high-risk patient. Neville was basically told to go home. This man is the father of my kids. I could not allow this to happen, so I left my job as a cosmetic consultant to care for him.”

The nephrologist said overweight patients did not qualify for kidney transplants due to health risks.

“His kidneys were suffering for a while but no one knew. When I met him in January, he was morbidly obese and 40% of his body weight was water retention, which was concerning. He needed dialysis.”

Aware of the family’s financial predicament, and Pillay not being on medical aid, the doctor rallied together other private specialists and Pillay was given a round of dialysis at the private hospital.

The doctor also arranged for further treatment at a dialysis centre but the family had to pay between R1600 to R2000 for each treatment.

The couple managed to draw on some of their savings but then Pillay had another setback.

In April, he suffered a mild stroke and the blood vessels in his eyes burst, which resulted in him being left with partial vision.

“The money that we were paying for his dialysis now had to be used for other medical expenses.”

The doctor explained: “In Neville’s case, the small and big blood vessels took the strain and gave up. The small vessels attacked his vision, while the large vessel caused the stroke.”

Carol said their lives had been turned upset down.

“We downgraded from our three-bedroom family house, in Ballito, to renting a home in Merebank. Neville continues to go to the government hospital and sits for hours to get basic medical care, and some medication.

“He is just surviving. Our kids are at their lowest, seeing their dad this way. The youngest refuses to go to school because she is afraid something will happen to him and the older one, out of desperation, posted about our plight on her dad’s Facebook page on Sunday.”

Speaking before dialysis on Tuesday, Pillay said it was frustrating when he was told by staff at the public hospital that there was nothing they could do.

“They literally said go home and die. They did not want to help in any way. What is the point of making a contribution (to tax) and expecting your country to take care of you? I am not the only one. There are so many others being refused help.

“I have two girls, 17 and eight. Any child wants their dad around and for someone to say to you ‘sorry there is nothing we can do’.”

Pillay added: “God willing, when I am on my feet again, I plan on going into philanthropy, talking about this disease, helping people and helping families. I don’t care about money, a big house or a car. I just want to make a difference.”

A fellow comedian, Meshantan Naidoo, who referred to Pillay as his “idol”, intends hosting a variety show. The funds raised will be used for Pillay’s medical expenses.

“Neville was the first person who interviewed me when my videos went viral on social media. Last week, I watched the Kings of Mulberry Street, in which he featured, and I messaged him to say I enjoyed his performance but his wife responded. She said he was unwell.”

He said entertainers often “lived hand to mouth” as they did not receive a set salary.

“After listening to his family and knowing how much Neville has done for everyone, I wanted to help. I have secured comedians, singers and bands, for a variety show, and the money will go towards his medical expenses.”