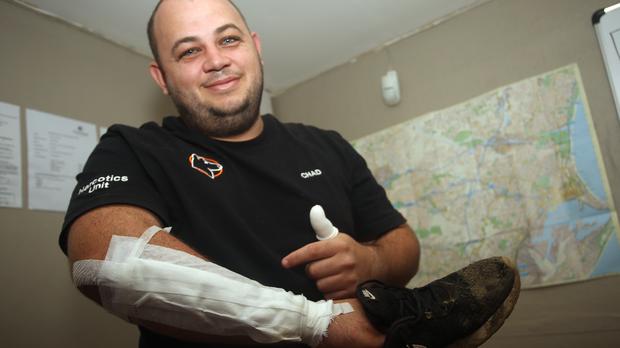 Durban – A sharp security company owner shielded four children from rampaging gunmen by rolling them down an embankment after a robbery at a tuckshop at Jadhu Place informal settlement, in Springfield, Durban, on Thursday morning.

Chad Russouw was driving past when he saw a crowd at the corner of Alpine and Cope roads who were chasing robbers who had just held up the tuckshop.

“We started chasing the three suspects, there were some community members with me.

“As we went into Cope Road, they were running up the stairs. I had about five guys running with me,” he said.

Halfway up the stairs, one of the suspects turned and opened fire on the crowd. Four people were injured, including Russouw.

Bullets grazed his toe and his arm.

According to Russouw, there were about 15 to 20 children, aged between 3 and 8, milling about.

He grabbed the closest four kids and rolled with them down the embankment on the side of the stairway. “As we rolled, I got shot in the foot,” he said.

While protecting the children, he decided against shooting upwards at the attackers who would have been in a more an advantageous position.

“I was going to fire upwards and then I thought about the kids standing around,” he said yesterday in his office in Musgrave.

“Once we were clear, I took cover behind a wall. Then I realised I had been shot.”

He said he felt “a tingling feeling

Russouw believes the gunfire stopped when his attackers ran out of ammunition. He believed they shot eight rounds towards him and members of the public who had been on their tail.

Russouw said once the fracas was over he summoned help and was treated at Westville Hospital and discharged.

Netcare 911 spokesperson Shawn Herbst said victims were treated at the scene. “Once stabilised, the patients were taken to hospital.”

He said police had been present.

An earlier report stated that Mayville police would be investigating.

However, spokesperson Colonel Thembeka Mbhele said yesterday that neither Durban Central nor Mayville SAPS had any record of the incident.

Russouw said some community members came to thank him.

“Others didn’t care. Ten minutes later, the kids were back, milling around where they had been. Their parents didn’t pull them inside.”

He said police arrived about half-an-hour after the incident.

Russouw understood that his attackers fled into a nearby informal settlement and that, according to locals, they were not from the area.

Meanwhile, Blue Security has warned nearby Berea and Morningside residents to be on high alert after a shooting and an attempted housebreaking last weekend, which involved a gang driving in a Chevrolet Aveo, that seemed to be targeting the suburbs.

One of the company’s officers survived a shoot-out with suspects in the early hours of Monday.

Spokesperson Andreas Mathios said the officer had responded to a break-in at a business in Venice Road at about 5.35am. “The officer noticed a silver-grey Chevrolet Aveo parked outside the premises and a gang of approximately five suspects ran through the pedestrian gate, carrying electronic goods.

“They got into the vehicle and one suspect then opened fire on the officer as the vehicle sped off,” Mathios said.

“The officer returned fire and the suspects continued firing at him.

“He followed the vehicle to the intersection of Burman and Trematon drives but the suspects managed to get away after turning into Trematon Drive and heading in the direction of Windermere Road,” Mathios said.

This was the second incident reported in Venice Road believed to be committed by the same gang at the weekend.

A third attempted housebreaking incident was reported in Currie Road on Saturday.

Mathios said a resident had also reported an attempted housebreaking in Venice Road after he spotted suspects drive on to his premises in a silver Chevrolet Aveo at around 5.15pm on Saturday.

In the early hours of Friday morning, another Blue Security officer arrested a suspect and recovered stolen goods in Morningside. The suspect was arrested and handed to Berea SAPS at the scene.