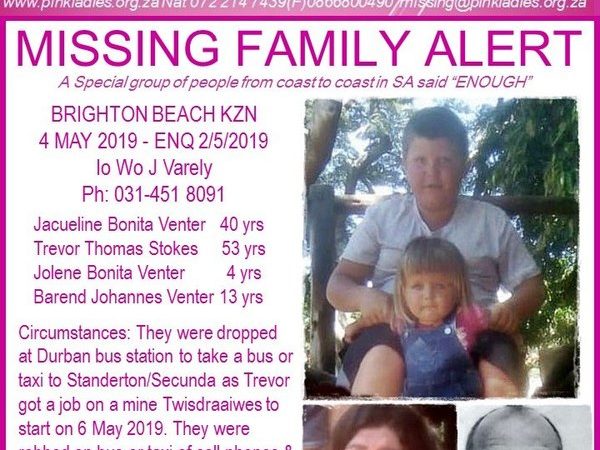 There is no sign of a couple and their two children after they disappeared without trace nearly a week ago when they were on their way from KwaZulu-Natal to Mpumalanga. Jacqueline Bonita Venter (40) and Trevor Thomas Stokes (53) were dropped off at the Durban bus station on May 4 with their children, Jolene Bonita Venter, 4 and Barend Johannes Venter, 13. From there, the family would take a bus or taxi to Standerton or Secunda in Mpumalanga where Stokes apparently received a job at a mine.

They have not been seen again since.

Jacqueline is pregnant and would soon give birth.

Dessie Rechner, founder and director of Pink Ladies, an organization dedicated to finding missing people, says it’s not clear whether the family has ever been on a taxi or bus. Both Venter and Stokes’ cell phones are off.

According to Rechner, no further information is available at that stage and Pink Ladies is still trying out what has become of the family.