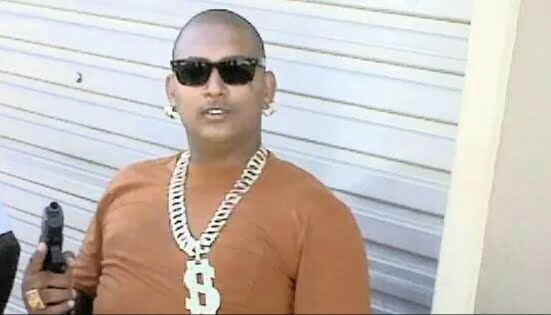 According to police sources, the 36-year-old tow-truck and minibus taxi owner appears to have been shot in the back of the head as he made his way to his car after exiting the gym at the Gateway shopping centre.

Periasamy was a well known underworld figure in Durban and at the time of his death was standing trial for alleged drug dealing.

Durban North police are at the scene and have not released a statement on what occured yet.

While its too early for police to find the motive behind his death Periasamy had become embroiled in a tow truck dispute recently.

Allegations are that his tow trucks had been creeping into the Durban Central Business district towing territory.

Periasamy had been warned several times to remove his tow trucks.

Periasamy was known for conducting a reign of violence in Phoenix.

Periasamy was shot more than once on his head.

A gruesome picture of his body lying on the floor, between two parked cars, is being widely circulated on social media.

Blood poured out from a wound to his head. A pool of blood is around his body.

Glen Naidoo, KZN VIP Unit private security company spokesperson, said they were dispatched to the mall. He confirmed one person had died from gun shot wounds.

“The crime scene has been closed off to the public. We expect people to converge on the scene in their numbers out of curiosity,”Naidoo said. Daily News