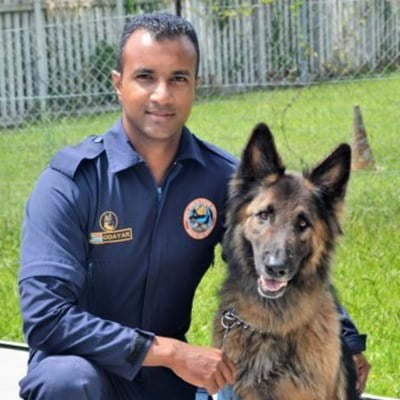 The body of a 35-year-old mother was found in a one metre deep shallow grave underneath the concrete slab.

The woman had been reported missing two days earlier according to Umhlali K9 Search and Rescue’s Sergeant Clinton Odaya, whose partner K9 Dante sniffed out the body.

“The woman’s husband reportedly came home from Mozambique earlier than expected on the Thursday evening before New Years. The next morning, their 13-year-old daughter woke up and could not find her mom.

“She asked around and family members reported her missing on the same day,” said Odaya.

A newly poured concrete slab near the house raised alarm bells, and Odaya and Dante were called in to investigate.

“Dante pointed out the cemented area and picked up a human scent. When it was dug up, the body was discovered.”

The husband has been missing ever since, and a case of murder is being investigated by KwaDukuza SAPS.